Osram cuts jobs to save €1bn 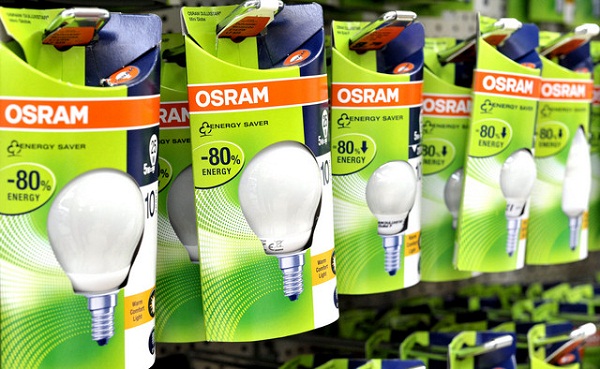 On the 30th of November, Osram informed that it would downsize another 4.700 jobs as well as sell its plants to better compete with Asian rivals. The job cuts at Osram will help the company save approximately €1 billion ($1.3 billion) and improve profitability as the market for traditional light bulbs shrinks significantly. Earlier this week Siemens AG announced to spin off Osram.

Osram, German light bulb maker, is to cut as many as 4.700 jobs, or more than 10 percent of its labor force, and sell its plants as it gears up to compete more efficiently and aggressively with its Asian rivals.  The job cuts are expected to be seen mainly outside Germany. However with previously announced downsizing plans the job losses at the 106-year-old company will total approximately 7,300 positions. As of September 30, 2012, Osram employed as many as 39,000 workers.

The great part of positions would be cut by selling Osram’s factories abroad, including plants and other facilities, as it was underlined by the company’s executives. As for Germany, only three factories will see the job cuts, amounting to approximately 400 positions. Wolfgang Dehen, chief executive officer at Osram, commenting on the downsizing plan added: “Personnel increases in the future fields will only partially compensate for the change in the traditional businesses.”

Osram, which has annual sales of approximately €5 billion and is the world’s second-largest lighting company by sales, wants to save as much as €1 billion by 2015, with half of savings coming from procurement.

The company has been recently witnessing changes and challenges as the sector shifts from conventional light bulbs. Sector companies have been focusing on light-emitting diodes and LED technology as well. According to estimates, the LED market volume is to quadruple by 2016 to approximately €37 billion, while conventional light bulbs will see a drop of around 15 percent.

Therefore it is not surprising that Osram aims at boosting its profitability by introducing new products to market. Analysts are convinced that the company might even decide to acquire chips for mass-market LED bulbs from its competitors, while concentrating its efforts on high-end technology.

Siemens AG informed that it would spin off Osram in 2013 and keep approximately 20 percent of the company, giving the remaining stake to shareholders. Shareholders are to get one Osram’s share for every 10 Siemens AG’s shares, according to a statement. The Osram spin off plan has to gain the approval of the Annual Shareholders’ Meeting, which will be held  in January, 2013.

Siemens AG decided to take the step after it realized that investments, which should be made to stay in the game, would be too great even for the company to accept.  On the other hand, Siemens AG informed that it would acquire Invensys Plc’s rail unit for roughly $2.78 billion. However Siemens AG is still looking for potential buyers for its baggage, handling, postal and parcel sorting businesses that do not fit the company’s portfolio, according to top executives.