Opened in 900 AD, Sean’s Bar is the Oldest Bar in Ireland

If only there was a magic potion that instantly brought people together and made them have fun. Oh wait! There is one. You would recognize it as hooch, booze, liquid courage or alcohol. Many great stories of many great people include at least one instance of them indulging in a nice drink of ale. And, when we think of drinking, we cannot forget about the Irish and the oldest bar in Ireland.  Drinking to the Irish is not just something they do to celebrate or to pass their time. It’s very popularly known that when the Irish drink, they drink to get drunk, to get hammered. Naturally, one would expect historic gems in the form of fantastic bars and pubs in Ireland. 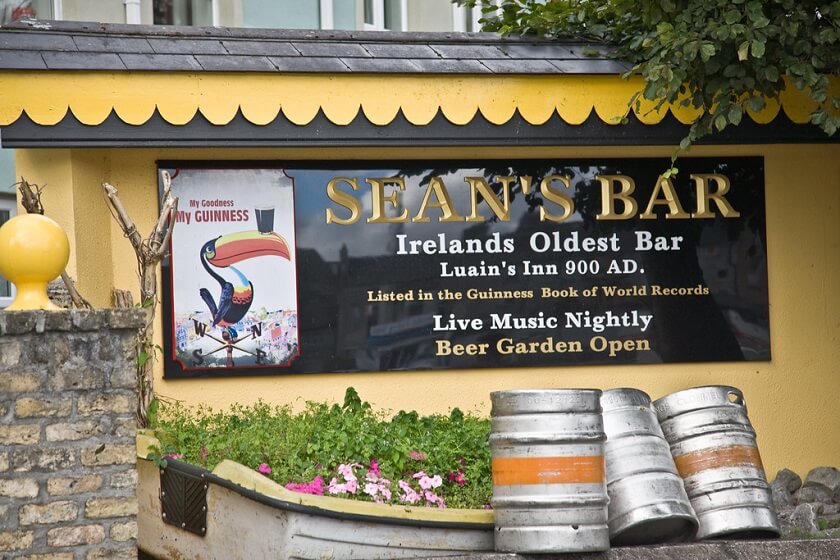 Guinness World Records has recognized Sean’s bar as the oldest bar in Ireland. Lonely Planet has included this bar in its list of ’most incredible 25 bars in the world’ and ‘50 bars to blow your mind’. According to its official website, Sean’s Bar has a detailed and documented history dated back to 900 AD.

Sean’s Bar offers a lot more than a nice drink to its visitors. It offers an experience which people from all around the world come to savor. The bar still maintains its ancient charm with an open fireplace, floors covered in saw dust and walls covered in different artifacts.

Scotland and Ireland both claim to have given birth to Whisky. ‘Whiskey’ and ‘whisky’ both are the correct spellings of this spirit. ‘Whiskey’ is what the Irish use and ‘Whisky’ is the proper spelling for the Scotch Whisky. Evidences suggest that both the counties have some part in giving birth to Whiskey. Sean’s Bar, located in Athlone on the banks of river Shannon, blends its own special Whiskey called the Luain Edition. It is dedicated to Luain, the very first Inn-keeper at Sean’s Bar.

Sean’s Bar has a sweet story of how it was originated. Athlone was known as the Ford of Great Antiquity. Luain Mac established an Inn close to the great antiquity in 900 AD. This Inn is today known as Sean’s Bar. Luain was a guide to the travelers venturing across the river Shannon.  Soon a settlement originated in this area. Later King Turlough O’ Connor built the first wooden castle here in 1129 to protect this settlement. The owners of the bar have evidence verified by archaeologists and historians that strongly suggest the presence of an Inn dating back to 900 AD.  During renovations in 1970, the walls of the bar were found to be made of ‘wattle and wicker’, building materials used in the ninth century which further supported the claim that Sean’s is indeed the oldest bar in Ireland. The renovators also found coins from that period, minted by local landlords and some of which now adorn the walls of this bar.

Global stocks rose to an all-time high, with investor showing confidence in a strong economic recovery from coronavirus and the vaccine effect, but the market is still a bit cautio
5 hours ago