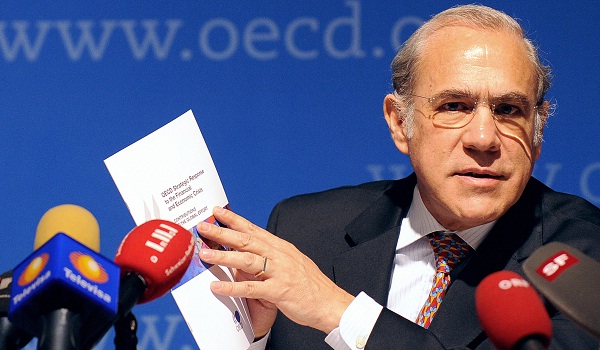 Angel Gurria- Secretary-General of the OECD

The OECD, in its newest report, did not present a colorful picture of the eurozone as it cut growth outlook for the 17-state bloc. The Paris-based organization underlined that the harsh economic conditions in Europe pose a threat to the global economy, thus the European Central Bank should take steps aimed at fostering growth.

Not a big surprise

On the 29th of May, the Organization for Economic Co-operation and Development issued its report, indicating the bleak estimates for the eurozone. According to the Paris-based organization, the 17-member bloc is indeed in deep troubles. Having taken all data into consideration, the OECD estimated that the bloc, which includes 17 European Union members that use the euro – the common currency, would slump by around 0.6 percent in 2013, compared to the previous estimate of a 0.1 percent contraction. Thus the differences between the eurozone and the US are expected to substantially increase as the US economy will witness an expansion of 1.9 percent in 2013 and 2.8 percent in 2014. Japan, however, will enjoy an advancement of 1.3 percent in 2013 due to implemented stimulus measures by the Shinzo Abe’s government. Furthermore, China, which is a not a member of the OECD, is expected to witness growth of 8 percent, according to the Paris-based organization’s forecast.

As for 2014, the eurozone, which recorded a 0.5 percent decline in 2012, will witness 1 percent growth, according to the OECD estimates.

While revealing its estimates, the OECD underlined that the European Central Bank should consider taking more aggressive steps aimed at fighting off the recession. Indeed, the dismal situation in Europe “could evolve into stagnation with negative implications for the global economy.”

Not surprisingly, the OECD underlined that harsh austerity measures and low confidence were among the main reasons of the continuing dire economic situation. Thus it recommended more quantitative easing measures as they would foster economic growth. However, the Paris-based organization did not specify whether the European Central Bank CB should look up to the Fed while searching for a panacea for the eurozone’s gripes.

Undeniably, the pictures of other economies do not look much better, according to the report released by the OECD. Analysts note that this time the OECD showed the governments its dire projections, just to mention that the organization estimated that France would witness a 0.3 contraction in 2013, compared to an EU official forecast of a 0.1 drop.

As the picture of the economy is not colorful at all, central banks should stay alert and look carefully whether the global economic recovery is back on track. The OECD noted that the monetary policy was these days the strongest driver of growth, giving examples of the US and Japan.

Anna Domanska
Anna Domanska is an Industry Leaders Magazine author possessing wide-range of knowledge for Business News. She is an avid reader and writer of Business and CEO Magazines and a rigorous follower of Business Leaders.
« Chevron rather optimistic about its Australia’s LNG projects
Buffet satisfied with $5.6B NV Energy purchase »
Leave a Comment
Close