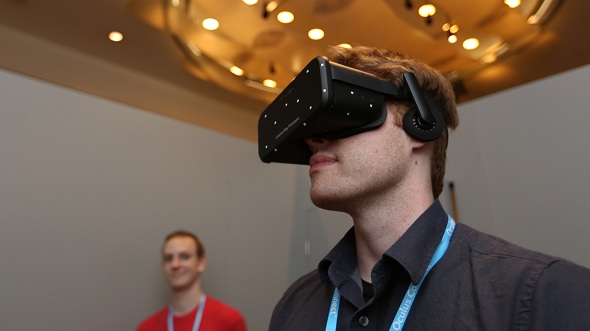 The latest prototype was unveiled in front of 1,000 developers from around the world at Oculus Connect developer conference

The latest prototype was unveiled in front of 1,000 developers from around the world at Oculus Connect developer conference over the weekend in Hollywood, Los-Angeles, California.

The new version of the VR headset includes improved screen resolution as well as 360-degree motion tracking. The new headset also adds integrated audio through built-in headphones but is optional.

However, Oculus VR CEO Brendan Iribe pointed that the Crescent Bay headset is meant to be an internal prototype and is not a developer kit nor it is the consumer version of the Oculus Rift. It is meant to showcase the new features to developers before the Development Kit is released.

“None of this is perfect yet, but it’s much, much better,” said Oculus VR chief executive officer Brendan Iribe at the Oculus Connect conference in Hollywood. “It’s in a state that we are prepared to show you today.”

Technical aspects of new device are yet to be revealed, however Iribe noted that the jump between the Oculus Rift Developer Kit 2 and Crescent Bay is as significant as the leap from Developer Kit 1 to Developer Kit 2.

Other than the 360-degree tracking and the built-in headphones, the latest prototype is lighter and features comfort designs that will lower weariness during lengthy gaming sessions. Similar to the Crystal Cove kit, Oculus is using the same array of LED lights which helps track movements more accurately.

According to rumors, the Crescent Bay could feature the same 1440p display found in the upcoming Samsung Galaxy Note 4 which certainly seems possible given the fact that the two companies are now integrating in the virtual reality arena.

Besides that, Oculus also plans to include both mobile and PC gaming from now on. “Today on PC you get high fidelity and a sense of presence, which is the magic of VR,” Iribe said. “With mobile the magic is accessibility, affordability, and portability.”

The world’s largest social network Facebook acquired two-year-old Oculus for $2 billion in July. The new device marks a big step for Oculus to emerge as a new social and communications platform. However, the company certainly has to face competition. While Sony announced that its PlayStation division had developed a virtual reality device called Project Morpheus, other companies including Google are creating their own products.

Even when a complete consumer version of the device is released, it will still need content such as games, movies, video, and so on. Oculus too is working towards developing virtual reality technology to be used beyond simple video gaming into a wider functional range. In order for the Oculus Rift to be a success, developers will need to create content for the device.

Anna Domanska
Anna Domanska is an Industry Leaders Magazine author possessing wide-range of knowledge for Business News. She is an avid reader and writer of Business and CEO Magazines and a rigorous follower of Business Leaders.
« California Issues 29 Permits for Self-Driving Cars on its Roads
Popular Crowdfunding Destination Kickstarter Updates Terms & Conditions »
Leave a Comment
Close

Bayer AG is in talks to buy Vividion Therapeutics in a roughly $2 billion deal, enforcing new IPO plans for Vividion.
9 hours ago

Auto Industry Leaders push EV plans ahead to raise new outcomes by 2030. Environmentalists also add to the bar by shaking things with vehicle emission rules by 2026.
12 hours ago