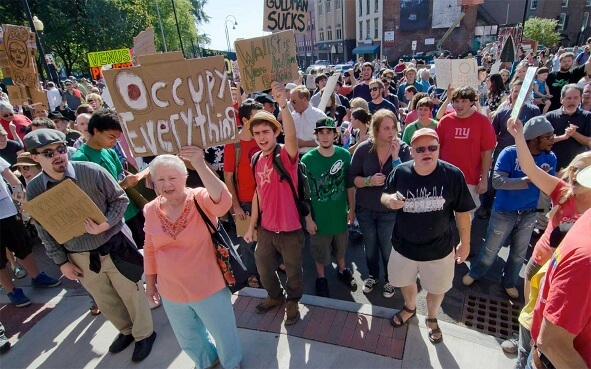 In a decade marked by revolutions and millions taking to the streets for some very basic needs, 2011 will be remembered as the year that saw it all: dictatorships defeated, regimes reigned in, political platforms taken over by the real people, and of course, the Occupy Wall Street movement. Occupy Wall Street is one of the most phenomenal revolutions to hit the streets in recent times; it is not a dictator or a military rule or a government bill the people are protesting this time: they’re not fighting against economic inequality and unfair distribution of wealth and resources.

If the streets of New York and so many other places in the world adopting the revolution are anything to go by, the quintessential American dream of wealth, prosperity and success isn’t quite so dreamy, or achievable, after all. And it’s not for the lack of effort on part of the American people; it is the top 1% of economic society that is making it impossible, and if the latest eco-political news is anything to judge by, the people are not having any more of it.

A very interesting facet of this revolution against economic inequality in general and the famed Wall Street in particular, is the rise of the Occupy George movement. Even as millions take to the internet, the streets, the news and media platforms, two brilliant advertising experts have come up with the perfect symbol to define the movement: the United States currency, occupied!

Occupy George is centered on the idea of taking over American currency as a metaphor for the vast economic disparities amongst the people of the United States. By using the American currency as the logo or the face of the Occupy Wall Street movement, the two ad executives have personified the revolution to perfection: they are displaying the very commodity, the very resource that has been occupied and manipulated and monopolized by a select few.

The Occupy George symbol is a graphics genius, a picture based on the American dollar bill constituting of five different stamps that contain information about the uneven distribution of wealth in the country and how earnings in the nation differ. The campaign is using the very item that is the crux of all the despair and differences: money itself.

The thrust of the Occupy George movement is to print this info-graphic on $1 bills and circulate them at different Occupy Wall Street movements in exchange for regular dollar bills, thus replacing the “few, hard-to-get dollars” with the “accurate, representative dollars”.

Occupy George is gaining momentum at a remarkable pace, and has already transformed the face of the Occupy Wall Street revolution by making it all the more hard-hitting, focused, and of course, brilliant. The dollar that has divided the American people is now uniting them, in unexpected ways!