Occupy Protesters to be Evicted by HSBC Court 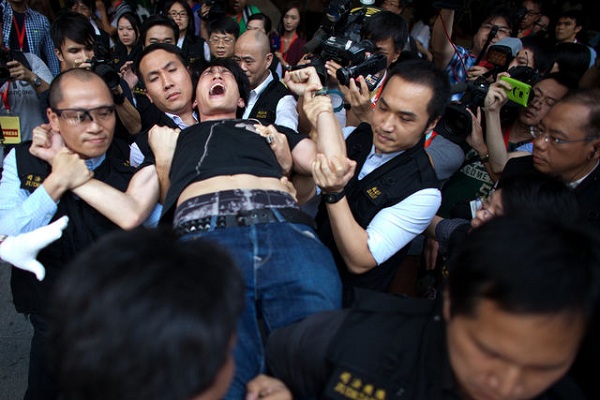 Bailiffs connected to HSBC courts in Hong Kong issued the orders to evict Hong Kong protesters from the Asian headquarters of HSBC Holdings Place, which happens to be the final holdout of the worldwide Occupy movement.

The HSBC court bailiffs had to evict Hong Kong protestors – a minimum of two demonstrators. They have also begun to pack up and remove the personal belongings of the demonstrators from the premises.

Sources claim that the protesters were mostly able to hog the spot due to the leniency shown by HSBC. The political climate of the city of Hong Kong is conducive to the fostering of a movement. It is easy to embark on a campaign to draw the attention of both the masses and the media which in turn creates a pressure on the authorities. Normally, the demonstrators do not possess the necessary resources to keep up such a campaign for an extended period of time since authorities evict Hong Kong protestors.

Protestors who were a part of the Hong Kong Occupy Central movement took control of the plaza present under the landmark HSBC building which was designed in October of last year by Norman Foster. The London Police had earlier removed demonstrators on the 14th of June while campaigns in the US ended in November following confrontations with the authorities.

A major scuffle broke out earlier today at the plaza of HSBC with both security guards and protestors jostling and shoving each other. The campaigners were mostly armed with a whistle and a bullhorn. They struggled and yelled as they were forced out of the area the which is now littered with mats, couches and tents.

According to a Facebook profile, almost as many as 50 protestors connected to the Hong Kong Occupy Central follow an ideal for the formation of a community platform where the group will be able to share and discuss their activities and ideals. The common consensus among them is that they will persist and most likely remain till the end.

All of the demonstrators were asked to clear the area out prior to 9 p.m. on the 27th of August by the HSBC Court of First Instance in Hong Kong. A measly 12 protestors remain on the site at the moment after the bailiffs had to evict Hong Kong protestors.

Hong Kong has witnessed a record increase in its wealth gap, increasing the dissatisfaction of the public. However, in spite of the circumstances, the Hong Kong Occupy Central Movement has not been able to draw as many people to support its cause as there were in past protest marches held earlier this year.

The anniversary of Hong Kong’s return to China on the 1st of July witnessed as many as 112,000 taking to the streets to ask that more be done in terms of human rights, inequality and greater minimum wages in China.

Students also played a crucial role in the Hong Kong Occupy Central movement as they camped out at the administrative headquarters of Hong Kong for 10 straight days along with their parents, dressed all in black. They made demands that Leung Chun-ying, the Chief Executive of Hong Kong, drop his plans for national identity classes for the Chinese. These classes, students claimed, painted an overly glorified view of the Chinese Communist Party. On September 8th, Leung made away with the deadline meant for the introduction of the subject to stem the rising tide of dissent. As far as organizers are concerned, Occupy Wall Street will mark its first anniversary by attempting to stall traffic around the financial district centered on the New York Stock Exchange.

Jay Raol
« Infosys to acquire Lodestone for $350m
Ford board is ready for Mulally’s retirement; Fields a probable successor »
Leave a Comment
Close