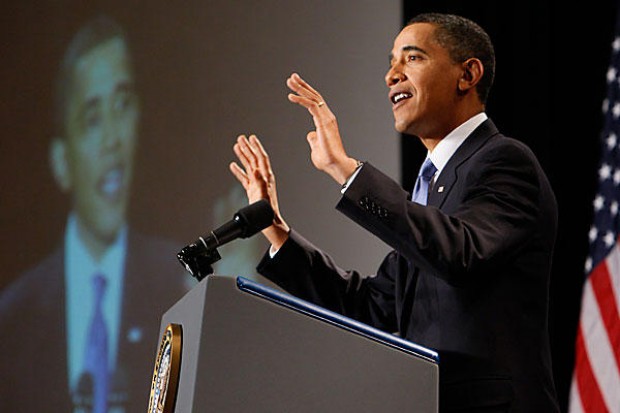 U.S President Barack Obama, in the deficit-cut plan he announced on Wednesday, proposed a $4 trillion deficit-cut over the next 12 years.

In sharp contrast to the GOP Plan, the key features of Obama’s plan include being more committed towards supporting the weaker sections of society, while ending Bush-era tax cuts for the rich.

The GOP Plan, if implemented would have done the exact opposite – making deep cuts into the Medicaid and Medicare programs, while making the Bush-era tax cuts permanent .

While Obama’s plan, if implemented, would offer an estimated cut in deficit by $4 trillion over 12 years, Ryan’s GOP Plan promises a $6 trillion slash over the next decade.

The success of the GOP Plan of proposed by the Republican front of the Congress would depend, to quite a large extent, on achieving large spending cuts through a major overhaul to the existing Medicaid and Medicare programmes.

Presented by Paul Ryan, U.S Representative from Wisconsin, the GOP Plan proposes transferring most of the responsibility for the said health programs from the federal government to state government, individuals, and insurers.

The process of this shift in responsibility would mean converting Medicaid, the health program for the poor, into a block grant paid to state governments, while Medicare, the health care program for seniors, would be replaced over a period of 10 years, with a system to provide money to seniors to buy private insurance.

In terms of more specific numbers, Ryan proposed slowing down Medicare spending by $40 billion over the next decade, before handing the program over to private insurers. This would mean that starting the year 2022, people turning 65 then and after 2022, would be given subsidies to buy private insurance.

President Obama reacted quite negatively to Ryan’s stance regarding entitlement programs, saying that such a move would lead to 50 million Americans losing health insurance, and would “end Medicare as we know it”.

Obama’s plan, on the other hand, did not really mention any numbers except his call to get rid of Bush-era tax cuts for incomes above $250,000 for couples.

With regards to Medicare, while Obama recognized the need to find a solution to soaring medical inflation, his plan broadly focused on conserving entitlement programs like Medicare and Medicaid.

In defense of these programs, Obama said that “We are a better country because of these commitments… I’ll go further – we would not be a great country without those commitments.’’

He was also reported as having further affirmed his stance of standing by the Medicare and Medicaid entitlement programs by saying, “I will not allow Medicare to become a voucher program that leaves seniors at the mercy of the insurance industry with a shrinking benefit to pay for rising costs.”

In terms of numbers, measures suggested in Obama’s proposal would yield a saving of $480 billion in entitlement expenses.

The President also outlined a “debt fail-safe” mechanism, which would come into play if the projected ratio of debt to GDP was too high, setting-off spending cuts across-the-board 2014 onwards.

While Ryan’s plan and Obama’s plan are positioned at opposite ends of the spectrum, his new proposal still involves a tripled deficit cut, as compared to the 2012 budget plan he put forth a few weeks ago. Already, this represents a “coming closer of numbers”.

Obama’s stance of standing by the middle-class, given his views on entitlements and higher taxes for America’s richest citizens, obviously makes a lot of political sense.

Ryan’s plan on the other hand focuses strongly on the $14trillion debt issue, and given the party’s victories late last year gives them the benefit of wanting to get the math right for the long-term betterment of the country.

Neslon admitted that gasoline, travel, food courts, and business centers performed exceptionally well, adding to the overall profits. The retailer hit an all-time high when it came
48 mins ago

Musk has been critical of Twitter’s free speech policies as he believes the social media giant is “the de facto public town square.” When the Elon Musk Twitter deal was annou
49 mins ago