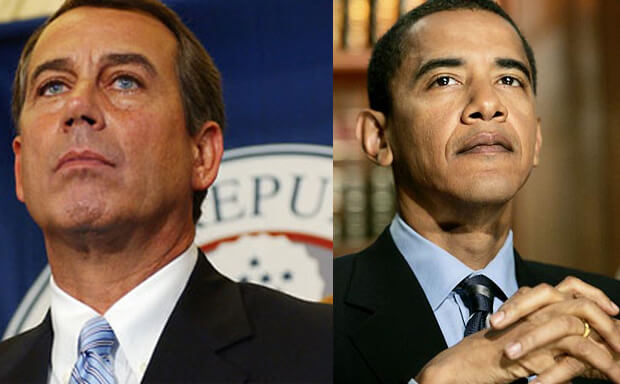 Are we looking at a U.S Default Scenario ?

With the August 2 deadline looming ahead, U.S President Barack Obama met with congressional leaders on Sunday night, with the agenda of arriving at some sort of agreement over the austerity measures that need to be put in place to reduce long term economic shortfalls.

While Obama continued to press forth for a $4 trillion deal towards reducing debt, Republicans reportedly held strong with their argument that there was not enough time to negotiate a deal that large, instead indicating their preference for the “Biden-type framework” which had previously worked on a $2.4 trillion deficit reduction package.

The debate currently revolves around the government’s need to increase its current $14.3 trillion borrowing limit.  According to the Obama administration, if the debt ceiling is not raised by 2nd August, it would essentially mean the U.S government defaulting on its obligations.

Timothy Geithner, U.S Treasury Secretary, reiterated on Sunday his statements from mid-May, about the “catastrophic” consequences that would arise from the U.S Government’s failure to arrive at an agreement over raising U.S debt ceiling by Aug. 2.

Over an interview on the CBS program “Face the Nation, Geithner said, “Congress has to act… If they don’t act, then we face catastrophic damage to the American economy, and the leadership, to their credit, and I mean Republicans and Democrats, fully understand that.”

The deadlock, which has led to both parties ending the meeting agreeing to meet again on Monday, and again, as many times after that as possible, to arrive at a decision, echoes Obama’s warnings about painful  budget cuts ahead after a band-aid deal in early April averted a possible U.S Government Shutdown.

The austerity plan that President Obama is pushing for, is a combination of revenue raisers that would amount to $1 trillion, and spending cuts, including reforms to Medicare and Medicaid and smaller adjustments in Social Security, which would amount to $3 trillion.

The plan is being reportedly touted by the Obama administration as a “grand” bargain, towards ending the debt ceiling debate.

According to sources familiar with the matter, Obama seemed to be making a case for the need “to do a big deal” now, and “if not now, when?”.

And though it was the Republicans who, over the meetings held for negotiations regarding averting the April government shutdown, had urged on the need to do “something serious about the deficit”, House Speaker John Boehner made it clear at the Sunday meeting that the Republicans considered Obama’s plan a bit too ambitious, saying further that a smaller package of about $2.4 trillion over 10 years was more realistic.

At a meeting a day earlier, Boehner claimed that the White House was pushing too hard for tax hikes and not doing what was required with entitlement reform.

The Sunday deadlock over the details regarding raising the U.S debt ceiling primarily concerns a disagreement between the Obama administration and the Republicans over raising money through tax revenues.

While President Obama and Vice-President Biden insisted that any deficit cut plan that was implemented would need to include tax revenues, the Republicans essentially came across to the Democrats as wanting “to cut Medicare/Social Security and protect the rich,” according to a statement by a senior Democratic congressional.

Don Stewart, spokesman of Republican leader Mitch McConnell of Kentucky, said in a statement, “It’s baffling that the president and his party continue to insist on massive tax hikes in the middle of a jobs crisis while refusing to take significant action on spending reductions at a time of record deficits,” with McConnell saying that according to him, raising taxes amid 9.2 percent unemployment was ” a terrible idea.”