At the first-ever Presidential stop, on a fund raising trip President Obama urged U.S. businesses to curb down emissions to reduce environmental threats that are affecting climate change. Obama announced a series of carbon-reducing steps, which are specifically designed for private companies to boost solar power and promote energy efficiency. 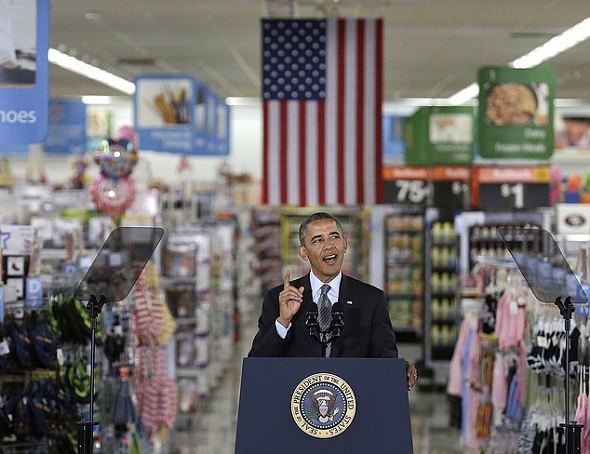 “There are cost-effective ways to tackle climate change and create jobs at the same time,” said Obama during his visit to a Wal-Mart in California on Friday. Obama publicized Wal-Mart’s pledge of doubling its solar projects at its stores and distribution centers by 2029 in the U.S and Puerto Rico.

Although Obama faces serious opposition in regards to his environmental agenda, the President said that he shall continue to carry on the Federal Government’s initiatives by taking help from private companies. Obama said that in last few months, he has been asking U.S. businesses to commit using more renewable energy. Currently, more than 300 companies and local governments have signed an initiative to make more use of solar energy. White House, released information on Friday over these saying that companies like Yahoo, Google, Ikea, Kaiser Permanente, Viridity Energy, Bonipak farms, Apple, Clif Bar and Taylor Farms have agreed to using more renewable energy.

“Together, the commitments we are announcing today prove that there are cost-effective ways to tackle climate change and create jobs at the same time,” said Obama in front of a crowd full of supporters and Wal-Mart employees. “So often when we hear about how we’re going to deal with this really serious issue, people say we can’t afford to do it. It won’t be good for the economy.”

This isn’t the first time that renewable energy solutions have been put forth by the White House. In 1979, President Jimmy Carter had solar panels installed on the roof of the White House, which were later removed when President Ronald Reagan took the office in 1980s.

President Obama’s 14-minute speech at Wal-Mart, outlines various steps that are designed to create more jobs and reduce emissions of carbon. Citing details from the report that was issued by the National Climate Assessment, regarding pollution that is caused by damaging our environment which triggers extreme weather condition, Obama said “Rising sea levels, drought, more wildfires, and more severe storms – those are bad for the economy. So we can’t afford to wait.”

The initiatives will include financing solar business ventures, training and development of solar workforce as well as enforcing new building codes in order to promote efficiency.

The action plan is set to power more than 130,000 homes and energy savings which the White House said, is equivalent of taking off 80 million cars from the road for a year.

Since more and more American homes will be using Solar every day, “solar is getting cheaper and is getting easier to use than before,” said Obama. “Cities, schools, businesses, the federal government – we are all going to pledge to waste less energy and we’ve got concrete strategies that we know work.”