Oasis of the Seas: Indeed a Larger Than Life Experience 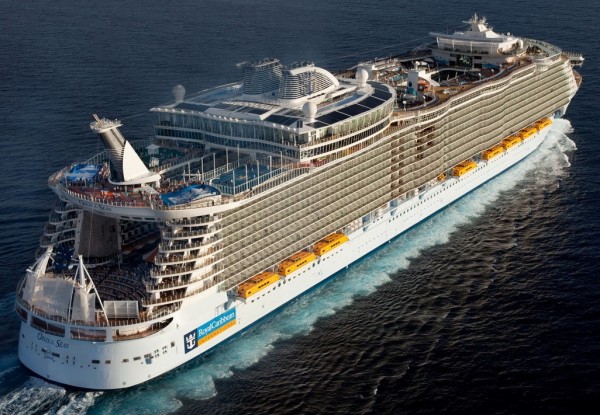 Oasis of the Seas

Over the years, there have been efforts to create wonders of the seas and the first vessel, built with the sole purpose of cruising, was Prinzessin Victoria Luise in 1900’s.  It’s not just the competition that is driving the builders of ocean liners to build massive vessels, but the tourism industry itself. Cruising has now become a major part of the tourism industry worldwide and people have been spending hundreds of thousands of dollars for crafting an experience.

A giant step into the future

Imagine an ocean liner carrying nearly 6,400 passengers. Grand, isn’t it?  That is how many passengers can the Oasis of the seas carry.  Oasis of the seas, owned by Royal Caribbean, is 1,180 feet long, much longer than the prior largest passenger ship and holds the capacity of carrying over 6400 passengers.  The construction of Oasis of the seas involved a network of nearly 600 subcontractors and provided years of labor to 5,800 man-work.  Royal Caribbean’s ships typically upscale those of the bargain Carnival Cruise Lines’ vessels, but they aren’t as traditional as those of luxury carriers such as Cunard.

Make no blunder; Oasis of the seas will be no clumsy giant. It has three main propellers will swivel 360 degrees on independent bearings.  Everything will be driven by electric motors powered by the ship’s central bank of six diesel generators.  The amazing thing is that it will be steered by an integrated navigation and control system, which will make it possible for the captain to move the ship in any direction — forward, backward, sideways — with the flick of a joystick. No tugboats will be required.

Now the wow thing is that, the cruising tourism has accounted for U.S. $29.4 billion and carried over 19 million passengers worldwide in 2011.  The swift growth has made it possible for the industry to see nine and more newly built ships catering to a North American clientele, which has kept adding every year since 2001 and others servicing European clientele. Older ships generally service smaller markets, such as the Asia-Pacific region while the new ships are a trend of the areas with higher growth in the tourism industry.

Cruise ships are a comparatively new phenomenon, born from reinventing many of the passenger liners made redundant by affordable air travel.  Cruise ships quickly evolved into purpose-built five star hotels, commencing with refitted ocean liners, and then being the biggest vessels having the most on-board amenities.

With its goal of bringing the best of the land to sea, Oasis of the Seas presents its passengers with features such as luxury suites and two-story loft suites measuring 1,600 sq ft with balconies overlooking the sea or walkways.  The ship has a casino, a zip-line, a mini-golf course, multiple nightclubs, a karaoke club, several bars and lounges, volleyball and basketball courts, comedy club, five swimming pools, theme parks and nurseries for children.

The idea of living in the same space and changing the scenery outside, be it permanently or temporary, is liked by all.  And who wouldn’t want to experience something that’s out of this world.  Oasis of the seas aims to make the park a public gathering place like a town’s central park, with pathways, seasonal flower gardens, and a canopy of trees.  Aspiring to give the ship a number of individual districts, the Central park neighborhood has seven neighborhoods to be unveiled on Project Genesis. Each neighborhood provides vacationers with an opportunity to hunt out for relevant experiences based on their preference, personal style, or mood.

There are seven themed areas called neighborhoods, which consist of onboard recreational, athletic, and entertainment activities. It’s a concept bearing resemblance to theme park planning like Central Park features boutiques, restaurants and bars, which can be raised or lowered between three decks. Oasis of the seas has the first living park at sea with over 12,000 plants and 56 trees.

The Pool and Sports Zone features a sloped-entry beach pool and two surf simulators which create an experience in itself. Liveliness at Sea Spa and Fitness Center features a spa for teens honestly brings in the advent of a relaxed atmosphere. Boardwalk features a handcrafted carousel, restaurants, bars, shops, two rock-climbing walls, and a temporary tattoo parlor. It also has an outdoor AquaTheatre amphitheater with 750-seat hosts the ship’s largest freshwater pool.

As stated by the President & CEO, Royal Caribbean International, Adam Goldstein, “Our brand identity is founded in innovation and on delivering the best cruise vacation through ‘WOW’ experiences. Central Park is a true evolution of cruise ship design and allows us to provide our guests with not only a more varied selection of balcony accommodations, but also a stunning public venue that will be a central element of the ship, both during the day and at night.”