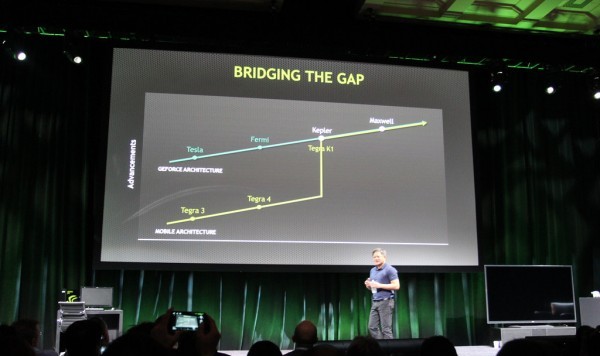 Nvidia company disclosed its 192-core Tegra K1chip—also known as Tegra 5—their most recent product in its line of “super” chips which aims to become the bridge between mobile computing and supercomputing. This advanced graphics super mobile chip incorporates Nvidia’s Kepler GPU, a platform that dominates the graphics market at the time, and is designed not only for tablets and smartphones but also for 4K consoles, cars, and televisions.

The new Nvidia mobile chip takes mobile computing to the same level of desktop computing without sacrificing battery life in the way, CEO Jen-Hsun Huang said at the Consumer Electronics Show in Las Vegas. “It’s the most successful architecture we’ve created,” he claimed. The advanced graphics super mobile chip will ultimately come in two versions:  a 32-bit quad-core ARM Cortex A15 processor presentation—similar to its predecessor, the Tegra 4 chip—and a 64-bit presentation that will come with the firm’s dual-core Denver, the CPU Nvidia has been talking about for quite a few years. Furthermore, Huang also unveiled that Epic Games will launch its next engine, the Unreal Engine 4, to the new Tegra K1. The company showed different examples of what the advanced graphics super mobile chip will be able to do during the presentation.  For instance, they displayed demos of photo-realistic scenes from a living room to a full rendering of a human face.

While the market for personal computers continues to diminish, Nvidia has being making greater bets on mobile chips with the aim of making its business less dependent on personal computers. Nevertheless, the shift to the mobile platform has not being easy for the firm and other companies that found their bearings on the desktop. The Nvidia mobile chips power the Google Nexus 7 and Microsoft Surface tablets; however, the American global technology company has had a hard time building its presence in the smartphone market. Therefore, the Tegra K1 Nvidia chip represents an important opportunity for the chipmaker and Huang hinted that the firm plans to go along with Android in any market the OS enters, including the automobile platform.

Last March, at the firm’s GPU Technology developers conference, Huang declared that the strength of the Nvidia’s Tegra line would enhance 100-fold by the line’s fifth year. It is expected that the next version of the Nvidia mobile chip, which is likely to be disclosed next year and code-named Parker, will be the incarnation of Huang’s claim.