In a conference call yesterday evening, NVIDIA Corp. declared that it is collaborating with Bosch and Daimler on their autonomous car project for metropolitan transportation. The Santa Clara chipset maker will leverage its artificial intelligence (AI) technology to the driverless car making it fit for the future mobility.

To create a successful and safe autonomous car model, it is due important to focus on the integrated hardware. Hence, Bosch and Daimler decided to select NVIDIA DRIVE Pegasus architecture to handle algorithms of an automated vehicle. 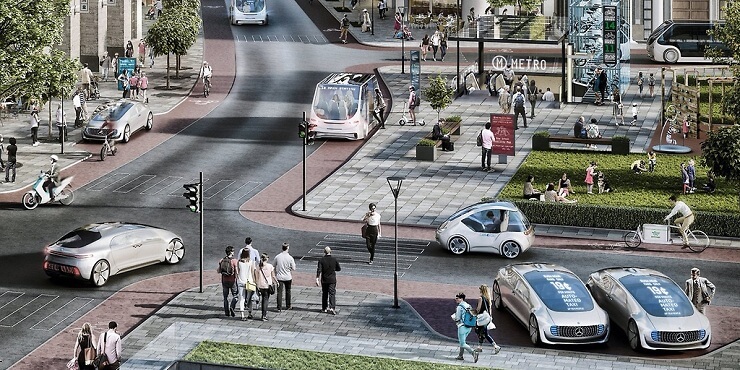 The chosen NVIDIA AV computing platform is designed to execute powerful computation operations. It can combine the data from all sensors with radar, video, lidar, sensor fusion, and analyze them within milliseconds. Moreover, it is capable of performing three hundred and twenty (320) trillion operations per second. So that makes it a dominant integral component for an intelligent car!

“You need outstanding software and tremendous computing power to do things which the driver considers to be the most normal things in the world, but which require immense technical performance behind the scenes,” said Sajjad Khan, Vice President Digital Vehicle & Mobility, Daimler AG.

Back in April 2017, Bosch Ltd., a leading supplier of automotive parts and Daimler AG, German automotive giant, teamed up to level up the automated mobility. The joint venture announced to manufacture a fully automated and driverless vehicle system (SAE Level 4 and Level 5, respectively) for urban roads.

Together with Bosch, the premium automaker unveiled the design of its autonomous car model earlier. The prototype is supposed to be an amalgamation of driving expertise of Daimler along with leveraging its global brand name, Mercedes-Benz, and Bosch being responsible for specified components such as sensors, actuators and control units. 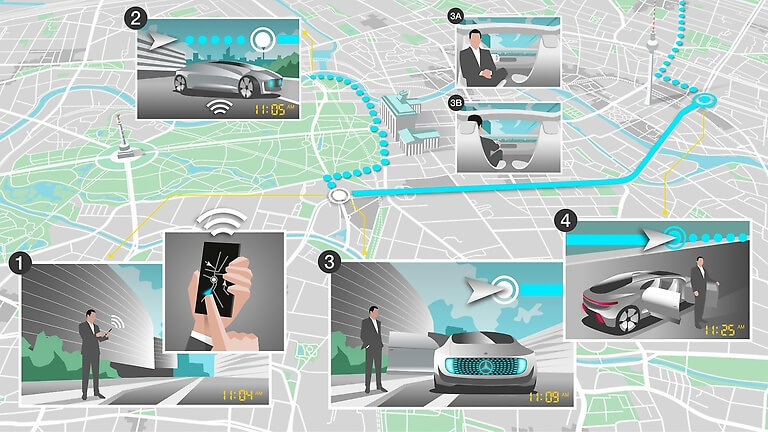 “The decisive factor is to introduce a safe, dependable and mature system,” said Dr. Michael Hafner, Head of Automated Driving at Daimler AG.

Eventually, the alliance endeavors to bring this digital vehicle system in the form of car-sharing services on the city roads. By introducing driverless mobility ecosystem, the companies aim to improve the traffic flow in the cities and safety on the roads. The prime idea of Bosch and Daimler here is to launch a car-sharing service in which the car comes to the passenger when booked via a Smartphone rather than the other way round.

“Developing automated driving to a level ready for series production is like a decathlon. It’s not enough to be good in one or two areas. Like us, you have to master all disciplines. ” Dr. Stephan Hönle, Senior Vice President Business Unit Automated Driving at Bosch. 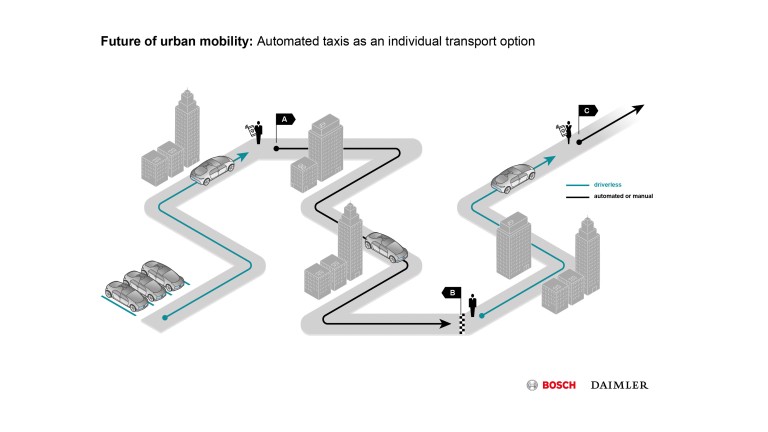 A pre-determined route for an autonomous car. Source: Daimler

Bosch and Daimler has finally close down on California, one of the major cities of Silicon Valley, for its first test fleet. The partners will soon begin the pilot project as Mercedes-Benz already has the approval to test automated vehicles in the California region since 2014.  During the testing, Daimler Mobility Services will collaborate with Uber-rival mobility services such as car2go (car sharing), Taxify (ride-hailing) and Moovel (multi-modal platforms).

Subsequently, by the second half of 2019, Bosch and Daimler will start offering commuters an AI-based shuttle service on selected routes in a Californian metropolis.