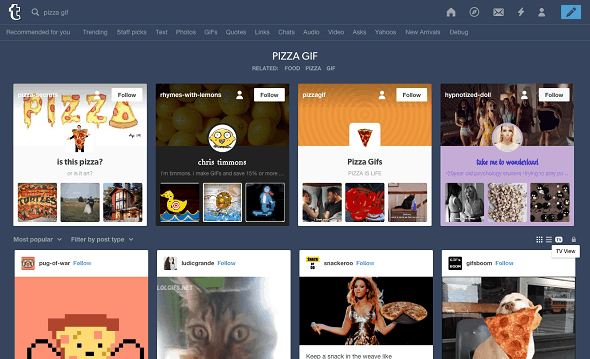 Tumblr, Inc. revealed a new feature called Tumblr TV, which will change the way people view, and find trending GIFs on the Internet. The new Tumblr feature is aimed at helping users discover and share GIFs on the web. It is the combination of a search engine and viewing feature of GIFs.

Founded by David Karp, Tumblr is a social networking website and microblogging platform, and is owned by Yahoo! Inc. The website service allows users to post multimedia and other contents to a short form blog, and follow other users’ blogs. The feature will help users to find animated images, which are loaded in the website, as well as give an option to view those images in a full-screen mode.

The new Tumblr GIF search engine was announced earlier a few weeks ago. It allows users to find and share GIFs on their own blog, when they’ve signed in, but Tumblr TV is made available to use, even if users don’t have a Tumblr account.

Tumblr’s new functionality is aimed at fostering better GIF discovery. Users will be given an option to view those graphics in three ways; i.e., list view, grid view, and the new TV view. The TV view option expands graphics to occupy whole screen, and plays them simultaneously. Along with this, player controls, such as, play, fast-forward, previous, pause button will be available in the new TV view option. The new feature isn’t like a real television set, but its aspect of the feature refers to what the interface displays.

Tumblr project engineer Bill Eager said that the GIF is really an old standard concept, which dates back to 80s. It was conceptually challenging one to introduce GIFs in a fresh way. GIFs incorporate mainly large files or can render gradually. The company already has a compatible search product, so it was easy for engineers to get Tumblr TV content right once, after they nailed down their experience.

Eager said that the device was initially introduced as a prototype model about three months ago, but the idea took a lot of traction, once the engineers have put it on the overhead monitor around the office. The company then capitalized on that energy and hustled to turn Tumblr TV into a reality for their users.

The new Tumblr TV is a reminiscent of Giphy’s TV platform that serves users with trending GIFs, and variety of popular TV channels like, The Simpsons, Beyonce, and Cats. Giphy – is a database that can be embedded and shared on social media platform, such as, Tumblr, Twitter, and more.

Tumblr has announced its own GIF search engine tool, which hunts around 12 billion posts for relevant GIFs based on keywords. The new TV view and webpage feature could help the blogging platform develop a reputation as a content discovering tool, and helps to further engagement with consumers beyond blogging.

The Tumblr TV’s new feature will direct users to the Tumblr TV page, where they will be able to view a stream of trending GIFs in the system. The advantage of the new feature is that users can create their own Tumblr TV channel by signing up their username to the end of the Tumblr TV URL.

Anna Domanska
Anna Domanska is an Industry Leaders Magazine author possessing wide-range of knowledge for Business News. She is an avid reader and writer of Business and CEO Magazines and a rigorous follower of Business Leaders.
« San Francisco-based Sunrun Inc. Files for an Initial Public Offering
Airbnb scores valuation up to $ 25.5 billion »
Leave a Comment
Close