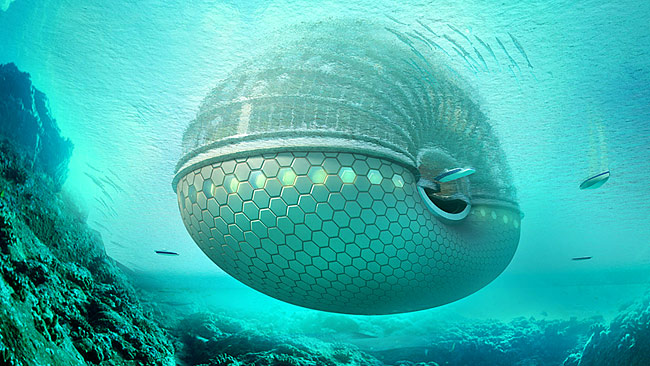 This giant floating steel-and-glass-vertical-doughnut hotel, claiming to offer a self-sustained environment, its lower half immersed in water and its upper half afloat, is nothing if not intriguing.

Designed to withstand floods caused by rising sea levels, The Ark Hotel has been envisioned as a safe, self-contained ‘biosphere’ – a haven in the case of disaster. 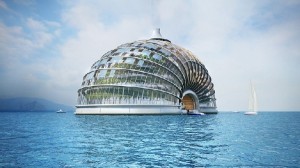 The design idea for the Ark Hotel, conceptualized by Russian architectural firm Remistudio, has been developed in response to the growing concern over climate change, global warming and rising sea levels.

The concept for the Ark Hotel has accordingly been designed by Remistudio, in collaboration with the International Union of Architects’ program “Architecture for Disaster Relief”, to satisfy the two primary concerns of contemporary architecture according to Alexander Remizov of Remistudio ; 1) maintenance of security and precautions against extreme environmental conditions and climate changes, and 2) the protection of natural environment from human activities..

The Ark Hotel’s basement is a shell structure, devoid of ledges or angles, offering the possibility of replicating the structure in various climates and seismically dangerous regions.

With a structure that allows the hotel to float and exist autonomously on the surface of the water, the design concept for the Ark also involves its functioning as a bioclimatic house with independent life-support systems, including elements ensuring a closed-functioning cycle.

Architects say the Ark’s shell-like construction of arches and cables evenly distribute weight along the entire corpus, making the building invulnerable to earthquakes.

This arched framework is covered by a special foil made of Ethyl TetraFluoroEthylene (ETFE) – a strong, highly transparent foil, self-cleaning, recyclable, more durable, more economical and lighter than glass. The foil itself is fixed to the framework by special metal profiles, which serve at the same time as solar collectors for water heating and as gutters intended for collecting rainwater from the roof surface.

The Ark Hotel’s cupola-type form, with a central bearing in the form of a tube with all engineering communications passing inside it, allows the building to achieve an optimum relationship between the building’s volume and its outer surface, substantially saving materials and producing effective energy usage. 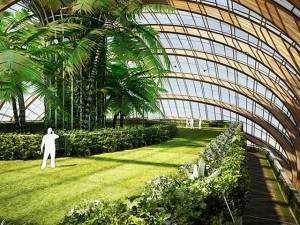 With its design concept deeply entrenched in “green design”, the Ark Hotel attempts at being self-sustaining at as many levels as possible.

The building uses solar panels and a rainwater collection system to provide inhabitants with power and water, while the greenhouse-like environment created by lush vegetation helps with air quality and also provides food sources.

The transparent structure allows maximum daylight to be filtered through to the internal rooms, reducing the need for lighting, while a self-cleaning layer on the skin of the building ensures a high quality of light

The Ark constitutes a single energy system. Its shape is convenient for installing photovoltaic cells at an optimal angle toward the sun.

The cupola, in the upper part, collects warm air which is gathered in seasonal heat accumulators to provide an uninterrupted energy supply for the whole complex independently from outer environmental conditions. The heat from the surrounding environment — the outer air, water or ground — is also used.

Bet Japanese designers are sighing wistfully right now, hoping such designs had been implemented before the colossal damage-causing tsunami and earthquake last week !

Most meat in 2040 will not come from animals, says report. However, the recent decline in sales of plant-based meat fell by 1.8 percent compared to the year before, taking declines
5 hours ago