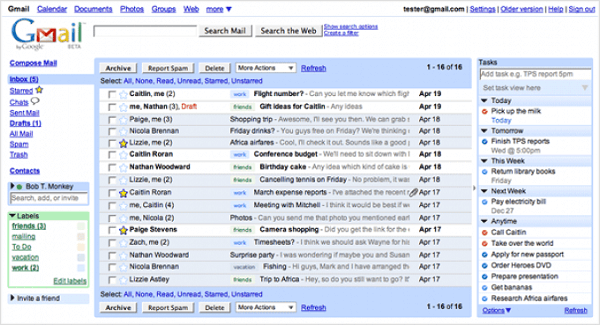 In a stunning admission Google Inc. claims, Gmail users or people who email them should not expect privacy. The search giant claims ‘all users of email must necessarily expect that their emails will be subject to automated processing.’

This is according to a motion filed by Google’s attorneys dated July 13, 2013 in a U.S. federal court. The filing, related to ongoing litigation about how the search giant operates the popular e-mail service, was unearthed by California-based consumer advocacy group Consumer Watchdog. This comes in light of the growing worldwide debate over privacy and security after the NSA leaks which revealed that major internet corporations are involved in furnishing web user data to security agencies without following the legal channel.

“Just as a sender of a letter to a business colleague cannot be surprised that the recipient’s assistant opens the letter, people who use web-based email today cannot be surprised if their emails are processed by the recipient’s [email provider] in the course of delivery. Indeed, ‘a person has no legitimate expectation of privacy in information he voluntarily turns over to third parties,’” explains Google in its motion to dismiss the case from Judge Lucy Koh of the US District Court in San Jose, California.

“Google has finally admitted they don’t respect privacy,” explained Consumer Watchdog’s privacy project director John Simpson in a statement. “People should take them at their word; if you care about your email correspondents’ privacy don’t use Gmail.”

The suit, filed in May, claims Google “unlawfully opens up, reads, and acquires the content of people’s private email messages.” It quotes Eric Schmidt, Google’s executive chairman: “Google policy is to get right up to the creepy line and not cross it.”

“Unbeknown to millions of people, on a daily basis and for years, Google has systematically and intentionally crossed the ‘creepy line’ to read private email messages containing information you don’t want anyone to know, and to acquire, collect, or mine valuable information from that mail,” the suit claims.

In its motion to dismiss the case, Google said the plaintiffs were making “an attempt to criminalize ordinary business practices” that have been part of Gmail’s service since its introduction.

Google Executive Chairman Eric Schmidt said the company’s reasoning shouldn’t come as a huge shock. He said the company is bound to the federal terms of the U.S. PATRIOT Act.

“If you have something that you don’t want anyone to know, maybe you shouldn’t be doing it in the first place,” Schmidt said. “But if you really need that kind of privacy, the reality is that search engines, including Google, do retain this information for some time. And … we’re all subject, in the United States, to the Patriot Act, and it is possible that that information could be made available to the authorities.”

Christy Gren
Christy Gren is an Industry Specialist Reporter at Industry Leaders Magazine; she enjoys writing about Unicorns, Silicon Valley, Startups, Business Leaders and Innovators. Her articles provide an insight about the Power Players in the field of Technology, Auto, Manufacturing, and F&B.
« Elon Musk’s Hyperloop could be the future of Inter-State transportation
Beats Electronics Plans to End HTC Partnership »
Leave a Comment
Close