Cleaning a car takes a lot of time and effort. It could be a backbreaking chore, if you prefer doing it by yourself. Fortunately Japanese giant Nissan Motors has developed the answer that could change the automotive market forever. And no, it doesn’t include a robot, just a revolutionary new kind of paint that can ward off water and oils. 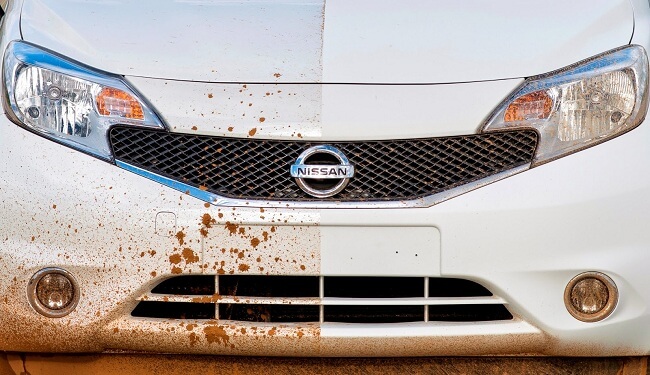 The auto maker recently debuted the Nissan Note, the world’s first self-cleaning car that features Ultra-Ever Dry paint, which it predicts will make car-washing unfashionable. The nano-paint technology works as a protective layer of air between the paint job below and environment around that can repel dirt, standing water, mud splashes even before it gets a chance to lay hold of the paintwork.

Nissan is teaming up with UltraTech International, a Florida company that specializes in environmental compliance products including spill containment. According to the company, the innovative paint technology is a super-hydrophobic and oleophobic coating that is designed to completely fend off almost any liquid from oil to water from settling on the paintwork.

The company said the technology performed well against rain, foam, frost and standing water as part of their internal testing. Nissan intends to extend those tests to Europe in the coming few months to subject it to some more conditions that the average driver might normally encounter. Eventually this technology could allow automakers to do away with windshield wipers by effectively warding off water, frost and dirt. Suppose, if with one flick of the finger the overnight snowfall on a car slides right off. Moreover, the new coatings can also help in keeping the car’s interior clean.

Currently, there are no plans to make the paint a standard feature, though technically Nissan already has a self-cleaning system built into its vehicles rear-view camera. While the car maker did not quite rule out the possibility of including the paint as a potential add-on for interested buyers, there has been no word yet on its durability, appearance, cost and supply.

Nissan is offering something as a value addition in a market that is constantly driven by technological changes, which is a great thing. This new car feature could be a boon for car owners who don’t need to worry about regular car cleanings.

However, there are certain things that Nissan is not being open about. For instance how often is the car owner required to coat his car with this new kind of paint? Could a single coating last for a decade? Plus, if the technology is set to fend off water, what happens when the car actually requires a wash?

Anna Domanska
Anna Domanska is an Industry Leaders Magazine author possessing wide-range of knowledge for Business News. She is an avid reader and writer of Business and CEO Magazines and a rigorous follower of Business Leaders.
« Jim Koch, co-founder and chairman of Boston Beer Company spills the secret to not getting drunk!
The Two Faces of Graphene: Miracle Material could prove to be Toxic to Humans & Environment »
Leave a Comment
Close