Google makes ‘Time Travel’ possible for users who want to see how the world has changed!!

All the Back to the Future fans will recall that a great part of the movie was set in the year 2015. When Marty and Doc has set a course for 2015, they had to dress like futurites to blend in. Marty slipped on a self-adjusting jacket and put on a pair of awesome runners that automatically laced themselves up. Power laces! Yes!

Call it a Time Paradox?

Legendary Nike designer Tinker Hatfield the man behind Air Jordan series and many other popular shoes confirmed on Friday that Marty McFly’s iconic power laces from ‘Back to the Future Part II’ will be released in 2015. 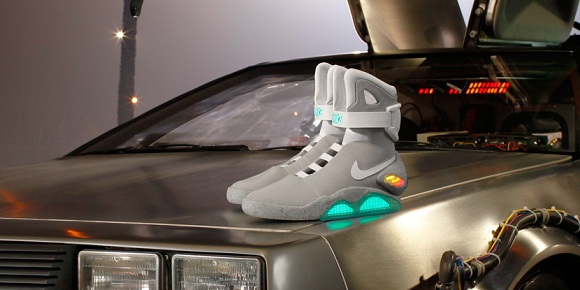 In 2011, Nike had a surprise release of the Nike MAG shoe, which you may recognize from the very same iconic movie. For the first run through, the footwear will be available to the general public.

1500 sets of shoe were auctioned off on eBay with all returns heading off to the Michael J.Fox Foundation. Fox enthusiastically remarked that Hatfield’s project is very exciting since is uniting three very passionate audiences: the Parkinson’s community, sneakerheads and ‘Back to the Future’ fans.

Yet the one thing Nike’s release was missing was the power laces. Presently, Hatfield says the wait is over, which is good news to all BTTF fans although he hasn’t specified whether power laces will show up on the Nike Mag or some other products as well.

If you’re not into waiting or high-tech sneakers, the 2011 release is currently available on eBay for around $8,000 but without the self-tying power laces.

Anna Domanska
Anna Domanska is an Industry Leaders Magazine author possessing wide-range of knowledge for Business News. She is an avid reader and writer of Business and CEO Magazines and a rigorous follower of Business Leaders.
« Clever Packaging: A Great Way of Capitalize on Cost Cutting & Rebranding
Toyota FT-1 Concept Confirms Sports Car Supra Successor in 2016 »
Leave a Comment
Close