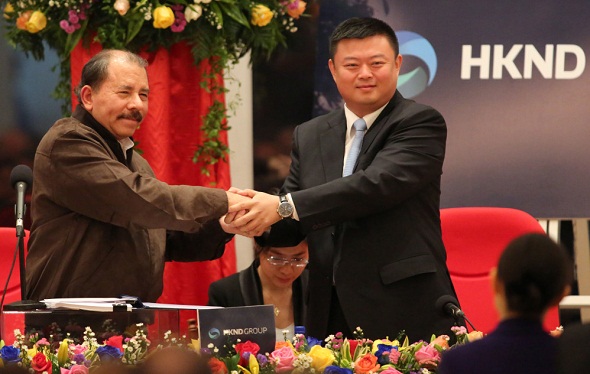 the construction will initially create 50,000 jobs and would raise annual economic growth to more than 10 percent.

The Nicaraguan government and China’s HKND Group on Monday announced the construction of a new $50 billion shipping canal linking the Pacific and Atlantic Oceans, an infrastructure project that aims to revitalize the economy of the Central American country.

“Today, the work that later will lead us to the beginning of that majestic … project, known as the Grand Canal, was begun,” said Nicaraguan Vice President Moises Omar Halleslevens during the symbolic ceremony launching the work in the southern coastal province of Rivas, on the Pacific Ocean

According to the official plan, the work includes building a road designed to accommodate machinery and some installations needed to build a port for the canal on the Central American country’s Pacific coast.

Nicaragua’s government says the proposed canal, which is expected to compete with the Panama Canal will be167 miles long and between 754 and 1,700 ft. wide and 30 metres deep enabling it to manage ships of up to 400,000 tonnes. It says the construction will initially create 50,000 jobs and would raise annual economic growth to more than 10 percent.

After one hundred years of the completion of the Panama Canal, this would be the second channel through the Central American mainland. The canal could also provide China a major foothold in Central America, a region long controlled by the United States.

Construction of the new waterway will be run by the Chinese company Hong Kong Nicaragua Canal Development (HKND Group). The company is led by Chinese billionaire Wang Jing who intends to invest $40 billion (32.6 billion euros) in the project, which is slated to be completed by 2019.

Since the project was first announced, it faced widespread scepticism including concerns about environmental degradation, land grabs and related human rights abuses.

“Given how much this will cost, it’s hard to take a stance on whether it will happen or not until there is a signal whether that money is available or not,” said Greg Miller at consultancy IHS Maritime.

Earlier, HKND hired the U.K.-based consulting firm Environmental Resources Management to assess the environmental and social impact of a project that is expected to displace 29,000 people. According to a document on HKND’s website, in late July, just two weeks after HKND made an announcement of its preferred route for the canal, ERM held community meetings in seven cities over 10 days.

A canal through Nicaragua has long been thought about but was considered financially feasible only in recent years.