Two of the fastest growing forms of renewable energy generation, wind and solar, both have the same limitation. They’re exposed to harsh weather conditions and routinely go for hours without generating any electricity. Most utility-scale battery systems have a lifetime of around a decade before they are no longer effective to hold charge and need to be replaced. Another tradeoff is safety, as often lithium-ion batteries explode or catch fires for no reason at all. It looks like the key to developing safe batteries that don’t explode is water. 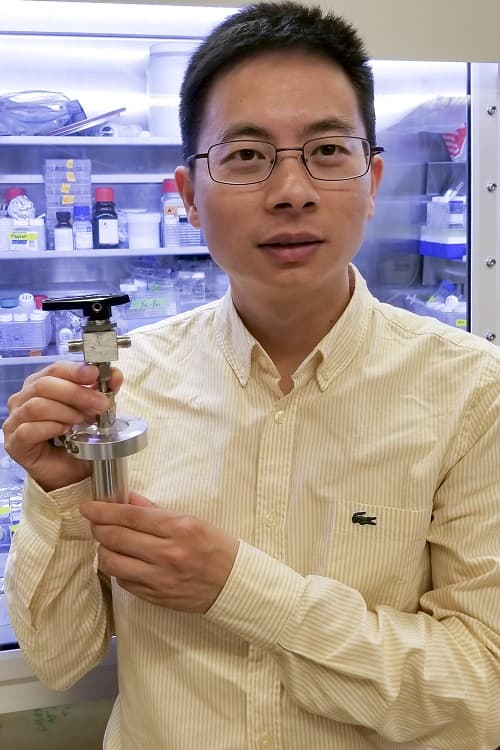 Postdoctoral scholar Wei Chen holds a prototype of what could one day be a ginormous battery designed to store solar and wind energy thanks to a water-based chemical reaction developed in the lab of Stanford materials scientist Yi Cui. (Photo by Jinwei Xu)

Stanford researchers have developed a water-based battery that are resistant to exploding or catching fire. The water-based battery made using water and salt could be used to store energy produced from wind and solar farm, increasing the effectiveness of renewable energy sources.

The prototype water-based battery is only 3-inches tall and generates 20 milliwatt-hours of energy, which can hardly power LED flashlights on a key ring. Despite the minuscule output, Stanford researchers are confident they can scale up to a grid-scale battery with a lifespan of more than a decade.

Yi Cui, a professor of material science at Stanford and senior author on the paper, wrote: “We believe this prototype technology will be able to meet Department of Energy goals for utility-scale electrical storage practicality.”

Cui estimates that given the water-based battery’s expected lifespan, it would cost a penny to store enough electricity to power a 100-watt light-bulb for 12 hours.

We’re a long way to go before we see widespread use of the water-based battery technology. So far, researchers have only tested a minuscule scale prototype in the lab. There’s no guarantee that a promising design like this may perform well on an industrial-grid scale. However, if the battery is cheap and long-lasting as it promises to be, we might start seeing its widespread use in the technology we use today.

Most importantly, cheaper and improved batteries could increase the number of solar farm and wind turbines we have today. This would help eliminate one of the biggest downsides of renewable energy production.

According to the Department of Energy estimates, around 70% of energy generated in the U.S. is by coal or natural gas plants, which account for 40% of CO2 emissions. By transitioning to renewable energy generation, we might win the fight against climate change.

Stanford researchers reported doing 10,000 recharges of the water-based battery prototypes, which is twice the DOE requirements. We will soon learn if the breakthrough battery has the potential to meet DOE’s grid-scale criteria.

Anna Domanska
Anna Domanska is an Industry Leaders Magazine author possessing wide-range of knowledge for Business News. She is an avid reader and writer of Business and CEO Magazines and a rigorous follower of Business Leaders.
« Blackstone to Acquire Gramercy Property in $7.6 billion buyout deal
Glassdoor Gets Acquired By Japan’s Recruit Holdings for $1.2bn »
Leave a Comment
Close