Jeff Bezos led Blue Origin Company recently took a giant progress leap towards sending astronauts into space. It launched the New Shepard rocket successfully at the Texas testing site.  This is the 13th successful launch of New Shepard and was the maiden flight of Blue Origin’s NS-4. The NS-4 is an enhanced crew capsule that can fit in six seats. It has beautiful display panels that highlight information to anyone on board, has push-to-talk communications systems on each crew seat, and efficient temperature controls. The rocket can collect data. 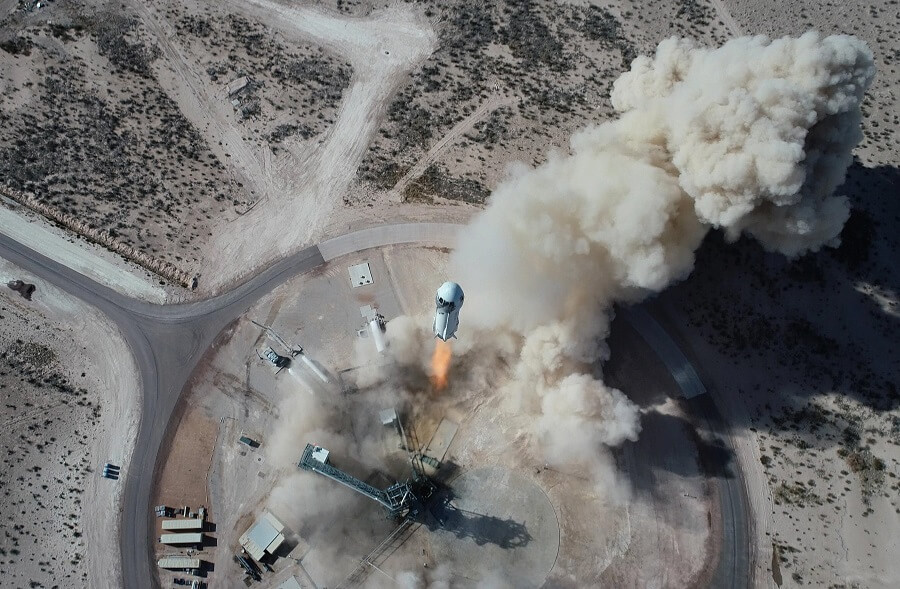 The New Shepard carried the dummy “Mannequin Skywalker,” which sat on one of the six seats. The blast-off took place at 350,827 feet, high above the Karman line.  Minutes after the liftoff, New Shepard’s booster made a successful landing, touching down on the ground with its four extended legs. The capsule, after that, made a return to the Earth aided by three giant parachutes. The capsule is designed to carry tourists into space one fine day.  The New Shepard rocket entered its seventh successful year of uncrewed flight testing. Crewed flights aren’t expected to happen way before 2022. New Shepard’s successful launch lays a positive groundwork on Blue Origin’s superbly ambitious plan- to land astronauts on the Moon.

The New Shepard rocket used the BE-3 liquid hydrogen and oxygen fueled rocket engine. Blue Origin plans to send two optimized vacuum versions of the efficient engines and carry New Glenn- Blue Origin’s orbital launch vehicle. The BE-7 engine uses the same fuel as the BE-3 and can be used on Blue Origin’s Blue Moon lunar lander. Blue Origin provided a full-scale prototype of the engine to NASA in August 2020.

New Shepard flew 13 times so far and carried several payloads to suborbital space before landing back on Earth. The reusable launch vehicle will ultimately carry people to space as an enjoyable ride. The launch test by New Shepard also included a test of the active landing sensor system by NASA. This system is specifically meant to build an autonomous, efficient, and flexible landing system for future space missions and moon landing vehicles.

The NASA landing system test conducted by Blue Origin also marked the first when it tested flying a heavy payload outside New Shepard’s capsule. All the payloads by New Shepard traveled inside the rocket capsule on the top of the booster. The external test this time was crucial to analyze various instruments’ measurements to give repeatable and precision landing capabilities.

While NASA is looking forward to land on the moon’s surface, it also wants to upgrade the space technology to handle the moon landings with full automation processes efficiently and with much higher precision. This upgrade will also enable NASA to hit specific targets on the moon’s surface and provide spacecraft the ability to do these again and again.

Stellantis, the carmaker formed earlier this year by the merger of Fiat Chrysler and PSA, has revealed that it no longer needs to buy emission credits from Tesla, which will result
18 hours ago

Anheuser-Busch InBev SA’s Chief Executive Officer Carlos Brito will step down from his role, effective July 1 and Michel Doukeris will succeed him as the new CEO. Brito, who beca
19 hours ago