With the importance of developing High Speed Rail Systems becoming increasingly recognized across the world, this particular initiative takes the rapid-transit concept to a whole new level!

The Aero Train, unveiled at the IEEE International Conference on Robotics and Automation in Shanghai, China, a levitating robotic plane-train that floats on a cushion of air, presents the most futuristic public transport system developed to date.

A team of Japanese researchers from the Tohoku University, including Yusuke Sugahara, has developed this revolutionary public transport system prototype, which does the one thing that really speeds up travel – by not running on rails, the Aero Train avoids friction with the ground. This project has been developed under the leadership of Professor Yasuaki Kohama over the past 20 years.

While Maglev Trains, with their magnetic levitation system, are supposed to do exactly this, the typical wind drag created between the bottom of a maglev train and the rails make these inefficient and expensive. The Aero Train scores a big one-up here, by not using magnets to create the air cushion sandwich between the train and the rails; instead using stubby little wings and fast-moving air to fly just above the ground. 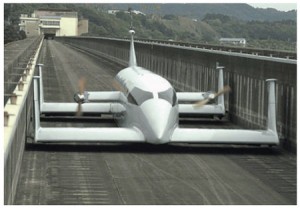 The Aero Train’s promised upto 200km/hr speed is much lesser than speeds that can be reached by other high-speed trains already in use, such as Shanghai’s Maglev train which is capable of achieving a top speed of about 430 km/hr or Japan’s “Hayabusa” bullet train  which can travel at upto 300km/hr.

However, the Aero Train does promise greater efficiency by avoiding the energy loss and consequent slowing down that takes place with the use of magnets in maglev trains.

While controlling the Aero Train could be a little bit tricky, with not just the throttle, but also the pitch, roll, and yaw needing to be controlled, the fact that this new-gen high speed rapid transit system has been designed to travel in a U-shaped channel, in addition to the further sophistication that the research team intend to incorporate into the unveiled prototype, should stop the Aero Train from staggering out of control.

Instead of going against the ground effect principle, the Aero Train maximizes it, by using the energy created due to the aerodynamic interaction between its wings and the surface of the ground for its propulsion, much like the famous Russian Ekranoplan developed decades ago did.

Robotics expert and Assistant Professor at the System Robotics Laboratory which is part of the Department of Bioengineering and Robotics, Tohoku University, Yusuke Sugahara led the team of Japanese scientists who have developed the Aero Train prototype.

Mr. Sugahara has become an internationally recognized expert on robotics, with his research on the bipedal humanoid robot “WABIAN”, the biped walking vehicle “WL” that he developed in 2001, to the latest Aro Train prototype developed by him and his team.

The Aero Train project was presented by Sugahara and his colleagues in their paper titled, “Levitation Control of Experimental Wing-in-Ground Effect Vehicle along Z Axis and about Roll and Pitch Axes,” at the IEEE International Conference on Robotics and Automation (ICRA), in Shanghai. Addressing the control system of the Aero Train prototype, this work by Sugahara has been developed under the guidance of Prof Kohama and Professor Kazuhiro Kosuge, professor in Tohoku University and president of IEEE Robotics and Automation Society