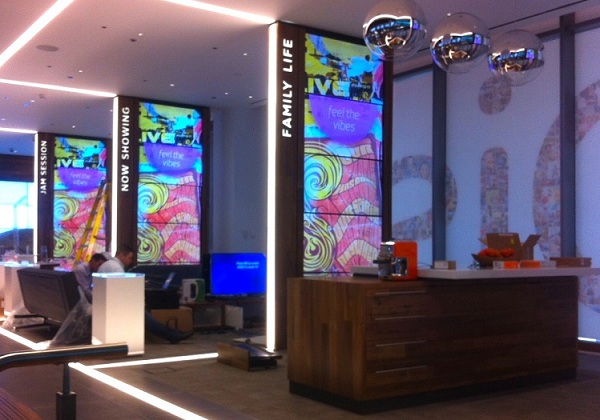 The advent of mobile technology also ushered in the growth in the number of mobile network carriers. The purpose of storefronts has primarily been to get new customers to sign up with them which have worked quite well till now. But retail professionals at most of network carrier companies have started to think of new ways in which real estate service can be put to use.

The today’s opening today in Chicago’s upscale Tony Michigan Avenue of the new flagship store of AT&T seems to be the epitome of retail experience. All of the 10,000 square feet space has been designed in a manner which depicts the bond between humans and their phones and how it has undergone a change over the last two decades. They also showcase the future of the telecom industry, specially from where profits of these large scale wireless companies will come from in the next few years. Therefore, AT&T store’s deals less with selling consumers a phone and instead involves promoting an experience.

AT&T, the second largest wireless network carrier in the United States, has always been known for being a thorough professional. The Michigan Avenue store, however, seems to be aimed to change this notion and build something more personal.

AT&T’s President of Retail Sales and Service, Paul Roth, claims he had no interest in beginning with their long-standing affiliate when conceptualization of the multi-million dollar AT&T store began to take place. The starting point of the company was apparently not the best retailer but rather the best customer service provider. Roth and his team entered discussions with Ritz Carlton, Nordstrom, Harley Davidson and Starbucks to learn what they could about building a solid foundation of customer loyalty.

Customers entering the AT&T store are greeted by a member of the staff, 40 in total, who have been instructed to approach visitors by 10 feet within a span of 10 seconds. After that, they are required to introduce themselves and then ask them their name in turn, a custom, no doubt, derived from Nordstrom. They will then escort them to the area where they want to go and even help you get started, a system reminiscent of the customs of the Ritz.

No matter what the requirement – just paying the bill or staring at the new phone models or even buying the latest hi-tech gadgets for the car – an employee will walk the customer to the door.

Roth claims that the customers will be treated like guests like in the Ritz. He added that the success of the future of retail shopping can be secured by ensuring that consumers meet with an emotional, heartfelt experience which the company is present trying to achieve with the store. According to Roth, the AT&T store is far from being perfect at the moment. But the minor glitches are being ironed out gradually.

There is a huge amount at stake and so no expense is being spared to ensure an improvement in service and looks of the mobile network carrier’s storefront. Roth stated that, in spite of reports indicating the contrary, most of the sales of AT&T in hardware are generated from the stores.

Richard Meryn
Richard Meryn, Associate Editor Industry Leaders Magazine (www.industryleadersmagazine.com)
« To be or not to be a Leader is the Question
Carlyle to buy DuPont Colors business for $4.9b »
Leave a Comment
Close