Amazon.com Inc. today opened a new vertical of its physical retail stores, Amazon 4-Star at New York’s neighborhood, SoHo. As the name suggests, all products stocked in this store have received either 4-star ratings or above from customers on the Amazon’s website.

“Amazon 4-star’s selection is a direct reflection of our customers—what they’re buying and what they’re loving,” Amazon mentioned in a blog post introducing its new retail store.

The e-commerce giant has already killed the offline retail stores through its diverse assortment of products, pricing strategies, rewarding loyalty programs, and a global digital reach. It will be interesting to see how it transforms the traditional retail industry with its junk-free store concept and pushes the other retailers to innovate and compete.

Amazon 4-Star store is basically the Home page of Amazon.com site in the form of a brick-and-mortar forefront. Source: Amazon

Amazon 4-Star store is basically the Home page of Amazon.com site in the form of a brick-and-mortar forefront. The shoppers in the store will see the products from “popular categories” on the site such as Devices & Electronics, Home & Kitchen, Toys, Kids & Baby, Sports & Outdoors, and Books. These categories are further divided into smaller sections, namely, Top Sellers and New and Trending.

“Today, the average rating of all the products in Amazon 4-star is 4.4 stars, and collectively, the products in the store have earned more than 1.8 million 5-star customer reviews.”

Of course, the new Amazon retail store will sell various Amazon Devices including Echo Spot, FireTV Stick, and about-to-arrive Amazon Microwave. The customers could even test these highly-rated gadgets instantly and then decide to buy them.

For the convenience of the shoppers, Amazon has created mini stops throughout the new store. It includes ‘Most-Wished-For’, which is a compilation of items that are most added to Wish Lists on Amazon’s website; ‘Trending Around NYC’,  features products that New York City-area customers are purchasing on Amazon.com; ‘Frequently Bought Together’; and ‘Amazon Exclusives’.

To make offline shopping interesting and fun in the new Amazon retail store, it has placed cards imprinted with customer review quotes; though the credibility of these reviews is a debatable subject.

Amazon 4-star opens tomorrow in the SoHo neighborhood of #NYC – check out a sneak peek of the store here: https://t.co/tA2G8zI5OK pic.twitter.com/UYD0UeEkA5

Each product on the Amazon 4-star shelf will secure a digital price tag that will display Prime price and list price, savings for Prime subscribers, a total number of customer reviews and average star ratings.

The Amazon Prime members will pay the ‘Amazon.com price’ for a product whereas the non-members have to pay the list price unless they opt for a 30-day trial Prime package.

It’s ironic that after disrupting the brick-and-mortar retail industry from the core, Amazon is cementing its position in the same space. The e-commerce giant already operates seventeen bookstores and four cashier-less stores named Amazon Go across the US. 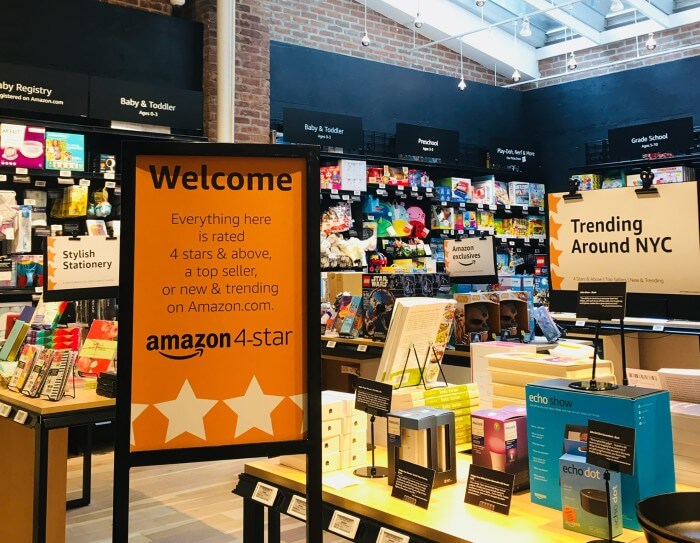 For the convenience of the shoppers, Amazon has created mini stops throughout the store. Source: Amazon

In fact, just last week a report surfaced about Amazon planning to build 3,000 cashier-less stores by 2021.

The online shopping king marked a greater push in the brick and mortar retail format by acquiring Whole Foods for $13.7 billion in 2017. There are about 470 stores of the giant grocery company.

Companies have raised over $400 billion in the first three weeks of 2021 as stimulus packages from governments and central banks have led to...
18 hours ago

Alphabet-company Google has announced $150 million to promote vaccine education and equitable distribution of the vaccine. It will also open...
19 hours ago