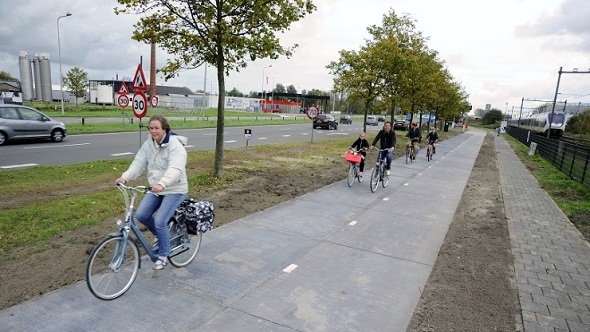 The world’s first road that converts sunlight into electricity is set to open in the Netherlands on Nov. 12. The solar-panelled bike path aptly called SolaRoad will stretch about 70-meters or 230 feet long (less than one mile) to connect two suburbs in Amsterdam, Krommenie and Wormerveer. The path will become the first in the world to open a solar road for public use.

SolaRoad is the result of the efforts by industry, research, private sector and governmental institutions. The project in the town of Krommenie consists of 8 by 11 prefabricated concrete slabs into which the crystalline silicon solar cells are embedded underneath a layer of tempered safety glass. Because the panels are laid flat and cannot be adjusted to the changing position of the sun, they are expected to generate 30 percent less energy than solar panels found on roofs. However, the researchers also note that with nearly 87,000 miles of roadways, Holland’s total road surface area is considerably larger than that of rooftops that could host solar panels.

SolaRoad said that the equipment is part of pre-constructed concrete slabs that have been refined in years of testing. The company says it’s been a great challenge to build energy-generating slabs that are both durable and rideable by thousands of cyclists a day.

“It has to be translucent for sunlight and repel dirt as much as possible,” the company says. “At the same time, the top layer must be skid resistant and strong enough in order to realize a safe road surface.”

The creators of the road hope that the road will likely generate enough electricity to power three households when it’s extended to 100 meters, or roughly 328 feet, in 2016. They call it a test of an idea that could someday result in roads generating the same power that electric cars use to travel on them. The project was primarily funded by the local authority and cost an estimated $2.4 million (€3 million).

This isn’t the first project that tries to consolidate electricity into roadways. Earlier this year, an Indiegogo campaign in the U.S for the Idaho-based Solar Roadways project raised funding of nearly $2.2 million to follow a more elaborate vision. It would combine features such as LED lights and heating elements into structurally engineered road panels.

And in last summer, a South Korean city has been testing its OLEV (Online Electric Vehicle) system, which makes use of certain sections of road to recharge electric-powered buses, capacitating them to carry less weight in batteries.

Anna Domanska
Anna Domanska is an Industry Leaders Magazine author possessing wide-range of knowledge for Business News. She is an avid reader and writer of Business and CEO Magazines and a rigorous follower of Business Leaders.
« Cockroach ‘Biobots’ To Help Find Survivors By Sound During Rescue Operations
McAfee Announces Its Annual “12 Scams Of The Holidays” List To Warn Consumers Of Cybersecurity Threats This Holiday Season »
Leave a Comment
Close