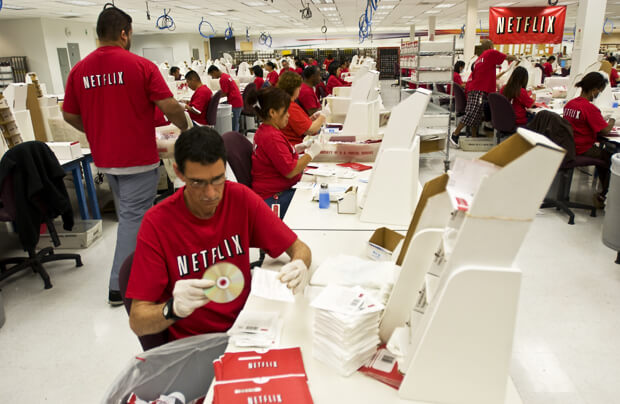 In a move that records Netlix’s biggest-ever price rise, this video subscription service, America’s largest, has raised prices by as much as 60%.

With Andy Rendich, chief service and operations officer of Netflix, saying that the higher prices “better reflect … the underlying costs”, what the price hike means is that users will no longer be offered the option of watching unlimited number of movies online and renting one DVD at a time for the $9.99 plan that existed till now; instead users wanting to use the combination service will now be required to pay $15.98 a month.

This would be broken down into $7.99 a month for Netflix Instant streaming and $7.99 to receive DVDs in the post.

Netflix assigned the need to hike subscription prices to rising costs the company is faced with for acquiring content for its digital streaming library. More elaborate details are scheduled to be provided when the company posts its financial results later this month.

While existing subscribers will have to pay these higher rates September onwards, the hike will be put in effect immediately for new subscribers.

Rationale behind the Price Hike

The overall shift within the subscription-based business model is, according to Netflix, aimed at offering better value for people who want only DVDs, while meeting costs in an appropriate manner for online content streaming services.

Netflix has a considerably extensive collection of physical DVDs. As opposed to this, its library of streaming movies and TV shows is not as well-stocked.

With the physically sending DVDs in the post component of Netlix’s business soaking up high mailing and processing costs, the online streaming business is obviously being considered by Netflix as its future. A good indicator of the future value posed by the online streaming business is the fact that after Netflix launched its “watch instantly” service in 2007, membership of the service has soared from 6 million to 23 million.

The catch here is that for Netflix to be able to add resources within this online streaming component, the service needs to meet the increasing costs of streaming licenses from Hollywood studios.

The price hike, coupled with the change in type of plans offered – separating the DVD subscription base from the users who prefer online streaming – aims to meet these costs.

Jessie Becker, Netflix vice president of marketing, explained this change in Netflix’s business model by saying “Last November when we launched our $7.99 unlimited streaming plan, DVDs by mail was treated as a $2 add on to our unlimited streaming plan. At the time, we didn’t anticipate offering DVD only plans. Since then we have realized that there is still a very large continuing demand for DVDs both from our existing members as well as non-members.”

“Given the long life we think DVDs by mail will have, treating DVDs as a $2 add on to our unlimited streaming plan neither makes great financial sense nor satisfies people who just want DVDs. Creating an unlimited DVDs by mail plan (no streaming) at our lowest price ever, $7.99, does make sense and will ensure a long life for our DVDs by mail offering,” she added

To start with, of course, Hollywood Studio executives, who, on condition of anonymity, said that they were very pleased with the subscription price hike declared by Netflix.

According to them, the price hike will help quell to quite an extent, concerns that Netflix was undervaluing studios’ content and encouraging consumers to avoid more profitable options for the studios, such as video-on-demand rentals and Blu-ray purchases.

A prime example of Hollywood studios limiting their presence on Netflix services is Sony Pictures. Sony Pictures’ contract with pay-channel Starz included a clause that prescribed a specific number of people who could view Sony movies online. With Netflix exceeding that number, movies by this particular Hollywood studio disappeared from Netflix’s resource base.

However, with the DVD-only subscriber option coming into play, and subscribers getting divided according to preference, Sony movies could possibly come back within Netflix’s online offerings.

Then, of course, there’s rental chain and prime competitor, Blockbuster, who is looking at developing a subscription streaming offering soon.

Blockbuster recently lowered their rental DVD prices in stores, and made good use of Netlix’s price hike to remind their loyal customers about reduced rates in the face of tough economic times. Blockbuster, was recently taken over by Dish Network.

Pay cable channels like HBO might be other beneficiaries from this change in Netflix’s revenue model. Until now, these channels, with their significantly higher costs, had to strong competition given Netflix’s lower prices.