Amazon examined data from March 1 to Sep. 19 on more than 1.3 million front-line workers and found that nearly 20,000 workers tested positive for the coronavirus.

Amazon revealed in a blog post that it had analyzed data of more than 1.3 million front-line US workers at Amazon and its grocery store chain Whole Foods Market between March 1 and Sept. 19, and found 19,816 workers contracted COVID-19. This is the first time any American company has made such a disclosure.

The revelation comes amid growing pressure from unions, governments, and investors who are calling for greater transparency on the total number of infected workers and the safety measures put in place to protect them following the deaths of several Amazon warehouse employees.

The e-commerce retail behemoth has posted a blog regarding the measures it has been taking in keeping its employees safe.

It wrote in the blog post that it had analyzed data of more than 1.3 million front-line US workers at Amazon and its grocery store chain Whole Foods Market between March 1 and Sept. 19, and found 19,816 employees to be infected or presumed to have contracted the coronavirus. 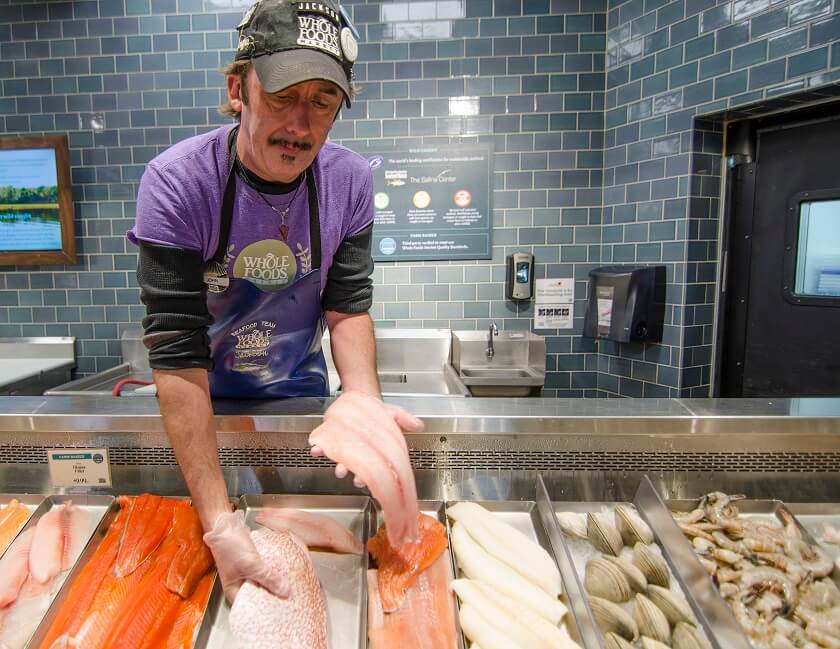 The Seattle-based company said it provided the data as part of its effort to keep employees informed, and to share details and best practices with governments and other companies. (Image: Whole Foods Sea Food Counter; Courtesy: Whole Foods Market)

The blog states, “Based on this analysis, if the rate among Amazon and Whole Foods Market employees were the same as it is for the general population rate, we estimate that we would have seen 33,952 cases among our workforce. In reality, 19,816 employees have tested positive or been presumed positive for COVID-19—42% lower than the expected number.”

COVID-19 Figures: “Not an arena where companies should compete”

The Seattle-based company said it provided the data as a part of its effort to keep employees informed, and to share details and best practices with governments and other companies.

Due to an unprecedented surge in business due to coronavirus-induced widespread lockdowns, e-commerce firms have been seeing increased activities in order which have put the companies under great strain as far as meeting its obligations is concerned. Amazon announced it was hiring more people to deal with the rush, which has led to the company obliged to adopt greater caution at work in terms of virus protocol.

The company has reported COVID-19 outbreaks across its warehouses in Europe and the US with at least 10 confirmed deaths.

Dissatisfied at the company’s initial response to the virus, employees at several Amazon facilities had staged walkouts in March and April demanding the company shut down facilities with positive cases. In March, workers from Spain, Italy and the US had signed a petition calling on the company to adopt stricter safety guidelines.

“Since March, workers and their communities have been demanding these numbers from Amazon,” said Dania Rajendra, director of the Athena coalition, and an advocate for Amazon warehouse workers. “Now we know why the corporation refused: Amazon allowed COVID-19 to spread like wildfire in its facilities, risking the health of tens of thousands of people who work at Amazon — as well as their family members, neighbors, and friends.”

Amazon, meanwhile, said it is conducting thousands of tests a day, with plans to increase it to 50,000 tests a day across 650 sites by November.

The blog post lists all the measures along with health care experts and epidemiologists that the company has implemented in all its facilities, including social distancing, masks, temperature checks, no meetings, staggered shifts, etc.

“Our employees are at very low risk of transmission in the workplace,” the company said. “And as we continue to ramp up testing, we’ll be able to identify more people who are asymptomatic, quickly contact trace, enforce our quarantine process, and help to remove people from the community so they can recover before they infect others.”

Marc Perrone, president of the United Food and Commercial Workers International Union, which represents grocery and meatpacking workers, called Amazon’s disclosure as “the most damning evidence we have seen that corporate America has completely failed to protect our country’s frontline workers in this pandemic.”

Companies are not legally obliged to reveal how many of their workers have contracted the virus, and few are doing so. Amazon advocates more sharing of such data to establish benchmarks for best practices. “Unfortunately, there are no standards for reporting or sharing this data, and there’s very little comparable information about infection rates and quarantine rates available from other companies.”