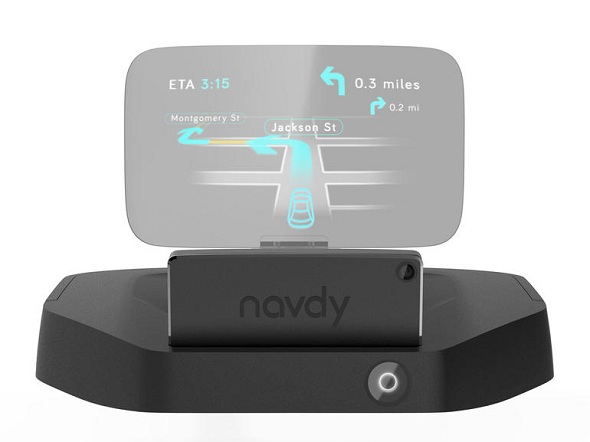 The Navdy dashboard device is basically known as “Google Glass for your car, but without the glasses.”

Statistics say drivers are three times as likely to get into an accident when they use their phone in the car and Navdy wants to help prevent such casualties. The San Francisco-based start-up has created a device that helps drivers keep an eye on their phone without looking away from the road.

The Navdy dashboard device is a high-resolution heads-up display (HUD) that’s placed on the car’s dashboard between steering wheel and the windshield with a display that shows driving directions, text messages and phone calls on a projection screen that appears to float 6 feet in front of the windshield.

The startup was founded in 2012 by Doug Simpson and Karl Guttag. The Navdy dashboard device is basically known as “Google Glass for your car, but without the glasses.” The company is aiming to raise $60,000 during its 30-day pre-order campaign that began Tuesday with plans to start shipping at the beginning of 2015 for a pre-order price of $299, with retail units selling for $499 later on.

The device can be paired with the Android phone or the iPhone via Bluetooth 4.0 to receive messages and incoming calls. Even gestures can control it. Mimicking a swipe movement, a user can wave his finger in front of the device to answer the call, while swiping left or right dismisses calls. The gestures will be read by the onboard camera and the user will receive the notifications of who is calling on the display, along the directions.

Calls can also be made through voice control or dictate messages. The system will provide turn-by-turn navigation via Google Maps to navigate around the town without the need to look over at a center console or the phone. The screen splits into two when there is an incoming call or message to show the dashboard on the left and highlight the notification on the right. Users can also stream music through Google Play Music, Pandora, Spotify or iTunes.

Navdy is powered by plugging it into the car’s onboard diagnostic port (most cars manufactured since 1996 should have this) to display pertinent driving information such as speed, revolutions per minute (RPM), miles-to-empty, fuel information, tire-pressure warning or battery-voltage warning, all presented within the drivers field of view.

Navdy needs to be plugged into the car’s OBD II port for power, a diagnostics point normally located under the dash instead of the usual lighter socket 12V point. Navdy believes that using the OBD-II port will allow developers to create much better features into future apps, including data related to fuel consumption and driving performance.

Anna Domanska
Anna Domanska is an Industry Leaders Magazine author possessing wide-range of knowledge for Business News. She is an avid reader and writer of Business and CEO Magazines and a rigorous follower of Business Leaders.
« Comcast Offers Free Service To Low-Income Families, Will Forgive Old Debts
Robots to Kill our Jobs by 2025? Maybe »
Leave a Comment
Close

As the old adage goes, good things come to those who wait. This might come true for movie theatre operator AMC Entertainment Holdings Inc. w...
12 hours ago