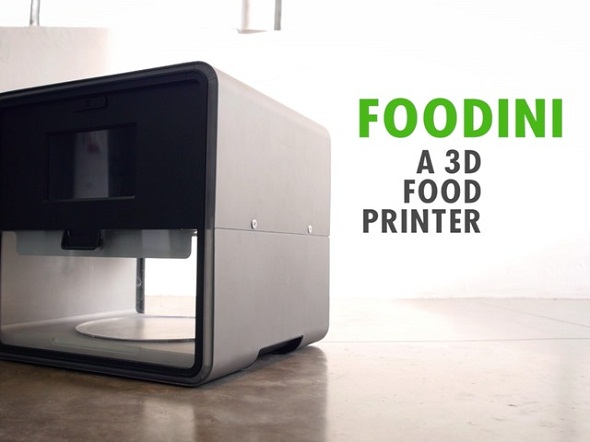 Barcelona-based startup Natural Machines may just revolutionize the food industry. The company has developed a consumer-friendly food printer called the Foodini that churns out a variety of food items including pizza, cheese burgers, spaghetti and intricately decorated cakes.

A co-founder of Natural Machines, Lynette Kucsma, explained how the 3D food printer works. “It’s the same technology, but with plastics there’s just one melting point, whereas with food it’s different temperatures, consistencies and textures. Also, gravity works a little bit against us, as food doesn’t hold the shape as well as plastic.”

In principle, the Foodini sounds like the ultimate laziness aid but Natural Machines admits there is more to the Foodini than pressing a button, at least for now. The 3D printer requires people to prepare fresh ingredients before they can print out any edible food. Right now, the printer is designed to take care only of the difficult and time-consuming parts of food preparation that discourage people from cooking at home, which in turn the makers hope will promote healthy eating and encourage more cooking at home.

Additionally, Natural Machines is also working with major food manufacturers to come up with prepared food capsules that will do away with the prepping altogether. The capsules will be free of preservatives and have a shelf life of about five days.

Currently, the Foodini only prints and assembles the food, which must be then cooked as usual before it is ready to eat. The company will also be developing another model in the future that will cook the food to be released sometime though no timeframe has been provided.

The idea also comes with a social element too. “There’s a touchscreen on the front that connects to a recipe site in the cloud, so it’s an internet-of-things, connected kitchen appliance,” said Kucsma. Users will also be able to control the device remotely using a smartphone, and share their recipes with the community.

The Foodini is only a prototype for now and is being catered to professional kitchen users with a projected retail price of around $1,000. However, Natural Machines, which is completing a round of financing, plans to begin mass production in the second half of next year.