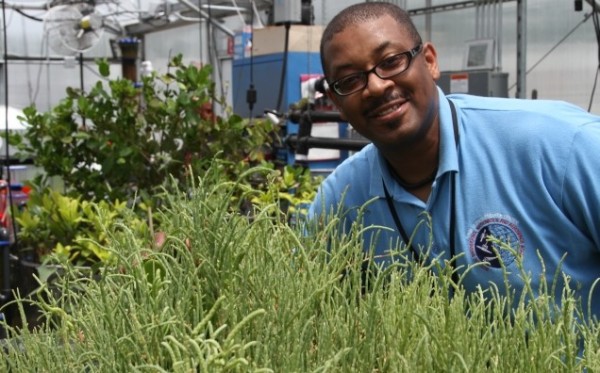 The interest for creating biofuels from algae and other sea-water plants have been increasing off late. Scientists at NASA Glenn Research Center in Cleveland have been trying to fill the skies with algae and explore new means to create alternative energy source for commercial aviation. It seems like Bilal Bomani, a scientist at NASA Glenn Research Center, Cleveland, has tied the future of space exploration to sub-aquatic life.

Salicornia – The Way to Go Green

Together with experiments involving everything from clean coal to bacteria, there is a plant called Salicornia that is said to produce an oil, which can be refined into biodiesel, as stated in an energy magazine.

There are several advantages that come handy with the Salicornia. First, these plants are oil-rich and easy to grow; second, sea-based nurseries leave land free for food production; and third, the process should take out more carbon from the atmosphere than what it puts in. Hence, Salicornia would be the best option that could be used to create alternative energy source for commercial aviation.

Salicornia is also known as Pickleweed or Dwarf Saltwort. It’s flourishing far from the coast — in saltwater and sand tanks at NASA’s wind-turbine powered Green Lab near Cleveland-Hopkins airport.

Algae are one of the world’s most common aquatic plants. Studies have already shown it to have great potentials to create oils for the food industry as well as for various fuels; making it an excellent replacement for fossil fuels.

Algae as both a food source and as a biofuel has been the subject of many projects all over the world; utilizing one of the earth’s most abundant plants that has been  supplying much of our oxygen as well as  food for marine life. Vegans get Omega 3 from algae sources.

Bilal Bomani said, “You know that hurricanes devastated Galveston, Texas.  When we went to Galveston, Texas, there was nothing there.  The oil fields were devastated, but we saw Salicornia all over the place!  It can actually help with the coast line, because it has nice root structure, and Salicornia has very thick roots.”

Scientist Bilal Bomani said in a statement to a business magazine, “Salicornia is a green solution.  In order for a product to be considered green, there are three metrics that need to be satisfied”.  One, is it sustainable?  Bilal Bomani says, “Are you preserving what you’re doing for future use or for future generations”. Well, since unsustainable means eventual collapse, and this is in context to a global scale here, then sustainable means so there can be future generations.  Two, is it alternative, and clearly this is alternative. Is it different in what’s being used today, or does it have a lower carbon footprint than what’s used conventionally.  And three, is it renewable? Bilal Bomani future explains what exactly does renewable mean, saying, “Does it come from earth’s natural repulsing system like sun, water and air”.

The main reason that the aviation industry has been target here for the use of biofuel or biodiesel is because, the field of aviation i uses more fuel than by every other, combined, report business news. Hence, there is a need to find an alternative. It is expected that this alternative would produce biofuel using domestic and safe ‘friendly’ resources.

As we a quite aware that 97.5 percent of the earth water is saline. Why not use it? And the great news here is that entire process of producing biofuel works without precious resources such as fresh water or arable land. Even the fertilizer comes from an unlikely source: freshwater mollies, which can be converted to saltwater in a matter of hours.

Salicornias are cheap and they love to have babies.  And that’s why scientists at the Glenn Research Center are planning to use them.  And so, all we have to do is basically is seed one of the tanks outside with 50 mollies, and now each one has over 300.  And that lab’s been in existence since 2009, November.

Back in the tropical, strong greenhouse at NASA Glenn, Bilal Bomani tends his plants and works to accelerate that bio-fueled future. He knows there are skeptics, disbelievers who doubt that the jets circling overhead will come to depend on what he’s growing. There have been criticizers who are curious to know what goes on in the Glenn Research Center. Bilal Bomani says, his top most reason to work on this project is that he wants to help ‘save the world’.

According to the US consumer price index, the inflation rate has witnessed a rapid rise during the past six months since it’s 0.8% increase in November.
7 mins ago

US Federal Reserve is charging investors with inflationary pressures by putting up interest rates to create a response to the surging inflation.
1 day ago