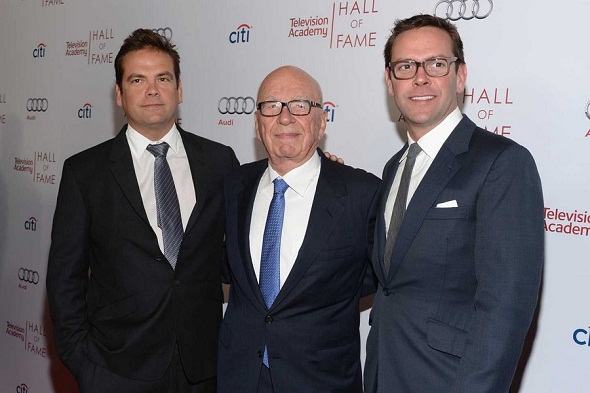 Murdoch’s sons, James and Lachlan, are prepared to get positioned at the top leadership roles at the company by next month.

Rupert Murdoch – Business Magnate, has announced succession plans for getting new bosses at 21st Century Fox. Murdoch’s sons, James and Lachlan, are prepared to get positioned at the top leadership roles at the company by next month. The Murdoch brothers are already having a big assignment cut out for them that is building a rapport with Roger Ailes (the chairman and CEO of Fox News).

The company has confirmed that after Rupert Murdoch, his son James Murdoch is going to be positioned as CEO of media giant – 21st Century Fox from the beginning of the next month. James, 42, who faced with the wake of phone-hacking scandal, involving the Murdoch-owned News of the world, will take charge from July 1st onwards.

Rupert Murdoch’s elder son, Lachlan, 43, will become executive co-chairman of Fox-owner of the Fox TV networks, film studio -20th Century Fox, and will hold a 39 per cent stake in Sky. Reports of the handover of power had been first emerged last week, and have now been confirmed by the company in an official statement.

Fox said that corporate functions, as well as TV and film operations will now be directly reported to the Murdoch brothers. Rupert Murdoch said that it’s their job to ensure a stable, long-term leadership for the company, and these appointments achieve that goal.

Both the Murdoch brothers are talented, and acting as both, shareholder and partner of the company, the brothers have strived and attempted the best to take their media business up to new levels of growth and opportunity, at the time of dynamic changes of industry. The company said that both brothers are humbled by the opportunity to lead, with their father, and aim to work like the talented team of executives at 21st Century Fox.

James Murdoch, previously heading BSkyB that has since renamed to Sky and has been acting as Co-chief operating officer at Fox.

In April 2012, Rupert Murdoch bowed to pressure to resign as director of BSkyB, in the wake of the telephone hacking scandal. He had already been executive chairman of the Murdochs’ UK newspaper group. He holds about 9.4 per cent of the voting shares at Fox through the Murdoch Family Trust, and also acts as a chair-person of News Corp (In June 2013, News Corp. and Fox were demerged)., which owns the Times and Sun newspapers, the Wall Street Journal, and New York Post in America.