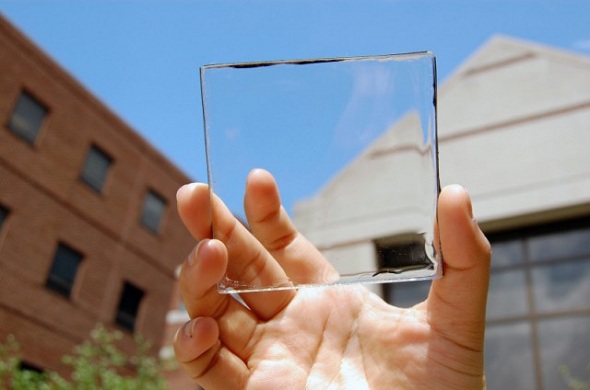 Scientists at Michigan State University have created a completely transparent solar concentrator, which like your cellphone’s screen could turn any window or sheet of glass into a photovoltaic solar cell. (See Image)

The team is certain that the transparent solar panels could be proficiently utilized in an extensive variety of settings, from “tall buildings with lots of windows or any kind of mobile device that demands high aesthetic quality like a phone or e-reader.”

“When you look at tall buildings, there is a tremendous amount of surface area. They can act as efficient collectors throughout the day,” says Richard Lunt, an assistant professor of chemical engineering at Michigan State University who headed the research. “In many buildings, we are already installing films to reject infrared light to reduce heating and cooling costs. We aim to do something similar while also generating power.” 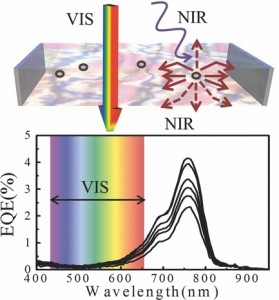 The TLSC comprises of natural salts that absorb particular non-noticeable wavelengths of ultraviolet and infrared light, which they then glow as an alternate wavelength of infrared light which is again non-visible.

Solar cells, particularly the photovoltaic sort, create energy by absorbing photons i.e. sunlight and convert them into electrons i.e. electricity. In case the material is transparent, it implies that the majority of the light passes through the medium to strike your eye. This is the reason why previous transparent solar cells have really just been somewhat transparent, which also cast a brilliant shadow of colors.

To overcome this obstacle, the Michigan State researchers have utilized a somewhat distinctive system for accumulating sun-light. As opposed to attempting to make a transparent photovoltaic, they utilized a transparent luminescent solar concentrator (TLSC). The TLSC comprises of natural salts that absorb particular non-noticeable wavelengths of ultraviolet and infrared light, which they then glow as an alternate wavelength of infrared light which is again non-visible. The emitted infrared light is directed to the edge of plastic, where thin strips of conventional photovoltaic solar cell convert it into electricity. If you look closely, you would only be able to see several black strips along the edge of the plastic. Generally, however, the main part of the solar panel is highly transparent.

The TLSC at present has an effectiveness of around 1%, yet they are currently working to make it reach at least 5%. Non-transparent luminescent concentrators max out at around 7%. When the transparent solar panels are put up on a bigger scale, in a large building, the numbers could quickly add up to something huge. 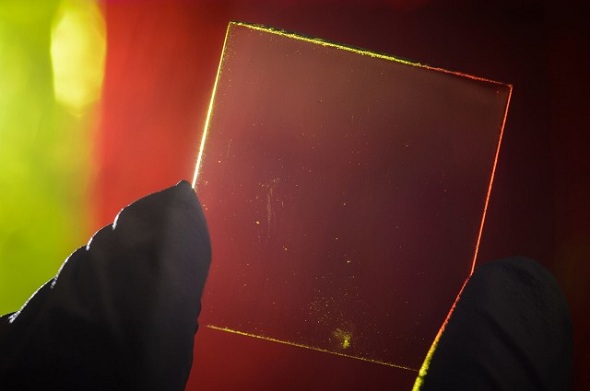 If you look closely, you would only be able to see several black strips along the edge of the plastic. Generally, however, the main part of the solar panel is highly transparent.

Scientists are sure that the innovation might scale from extensive industrial and commercial applications, down to devices, while staying “moderate” when it comes to the price they’ll be sold off at. So far, one of the bigger hindrances to huge scale reception of solar power is the meddlesome and revolting nature of solar panels. If we can create a lot of solar power from sheets of glass and plastic that look like ordinary sheets of glass and plastic, then that would be huge.

Richard Lunt has co-founded a company, Ubiquitous Energy, to commercialize the transparent solar panels. He supposes that the first applications of the TLSC could be witnessed in the next five years.

“Ultimately we want to make solar harvesting surfaces that you do not even know are there,” Lunt says.

Christy Gren
Christy Gren is an Industry Specialist Reporter at Industry Leaders Magazine she enjoys writing about Unicorns, Silicon Valley, Startups, Business Leaders and Innovators. Her articles provide an insight about the Power Players in the field of Technology, Auto, Manufacturing, and F&B.
« China’s Industrial Output Slows to a worrisome 6.9% in August
Cognizant Snaps Up TriZetto for $2.7B to Expand Healthcare IT »
Leave a Comment
Close