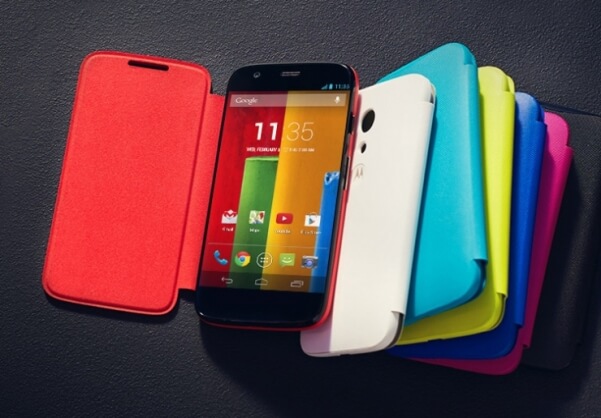 Smartphones have currently surpassed the traditional cellphone demand in the United States and since Apple and Samsumg are the companies which make most profits in the worldwide smartphone market, the manufacturers of cheap smartphones are forced to look for emerging markets where the new high-end devices are not that popular. This is the case of Motorola Mobility, the handset producer owned by Google, which is still trying to find its niche with the help of its new product: Moto G.

Yesterday, Motorola announced Moto G, its new low-priced smartphone. This device costs at least $180 without a contract, and the firm believes that it will appeal to customers in countries such as Chile, Peru, and Brazil, where there are more than 500 million potential clients.

The most attractive feature of the cheap smartphone is the access to Google’s Internet services embedded in the device, which enables users to experience a high quality mobile internet experience. However, this characteristic is not very attractive in China, an important potential costumer, for the government blocks several Google services, including Play, Google’s online store. Consequently, Denisse Woodside, Motorola’s chief executive, said that their ability to compete in China’s smartphone market was constrained and that the new low-priced smartphone won’t be offered in China at the moment. In addition, as many other American companies, Motorola will most likely find tough international competition, especially in countries where many smartphone makers have been selling low-priced devices for years.

Motorola announced that Moto G will go on sale next Wednesday in Brazil and parts of Europe, and to other parts of the globe, including India and Southeast Asia, until January. The cheap smartphone will also be available in the United States’ smartphone market at the beginning of 2014; the firm believes the device could appeal to customers who cannot afford a luxurious smartphone, especially children.

Among other characteristics of the phone, Moto G will have a big high-resolution screen and will run the latest Android software in order to support the most recent apps on the market. It has a 4.5-inch screen, which puts the device in between Apple’s iPhone 5S and the Galaxy S4 from Samsum Electronics.

This is an advantage that many low-priced smartphones on the market don’t possess. However, the Moto G lacks a special feature made for its higher-priced sibling, Moto X : the ability of the device to constantly listen for the user’s voice and quickly reacting to commands. The good news is that the goal of low-priced smartphones is not to be trendy or sophisticated, but to be functional. Therefore, this model represents an effort of the Google-owned company to return to grow and reach as many clients as possible.

Greensill Capital, a provider of supply-chain financing, is facing further trouble with Credit Suisse, the Swiss bank, withdrawing $10bn of ...
9 hours ago