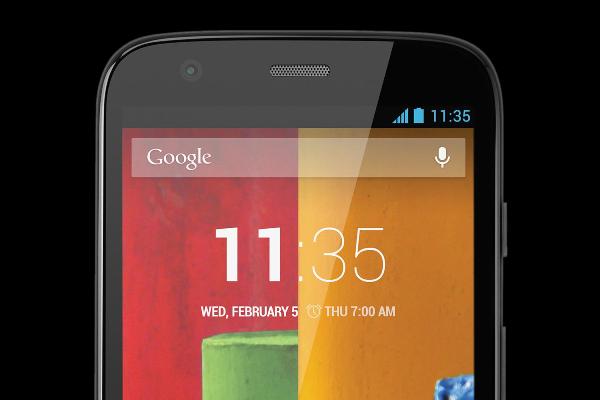 Motorola has released its new low-cost smartphone Moto G ahead of schedule and just in time for Thanksgiving Day holiday. The handset producer owned by Google had previously announced the device’s launch until 2014, but marketing timing always tends to have the last word in a decision like this.

The new cheap smartphone was made available on Motorola’s website starting at $179 and offering an off-contact deal, which represents a huge advantage. Moto G is being sold at one third of the cost of the current high-end products within the smartphone market.  This product is currently on sale in Mexico, Chile, Brazil, Peru, Argentina, Britain, France, Germany, and Canada. According to the company, it is expected that the low-cost smartphone will reach more 30 countries by early 2014.

This smartphone is a low-cost version of the Moto X, which was released earlier this year in the United States, lacking several features including a high-density camera and the ability of accessing the fastest networks. Nevertheless, the cheap smartphone is not that cheap in some countries. For instance, In Brazil, the lowest price for the Moto G is around $280 or 650 reals. Yes, it is below the price of an iPhone, which is around $1,000 in the Latin American country; however, it is still not as cheap as it is in the United States’ smartphone market.

Some of the features included in the low-cost smartphone are its high resolution 4.5 inch (11.5 cm) display, which puts  the device in between Apple’s iPhone 5S and the Galaxy S4 from Samsung, and all-day battery. In addition, it runs the latest versions of Google Android’s operating system. It also comes with a handset powered by a 1.2 HGz quad-core Qualcomm Snapdragon processor, and two cameras, a 5-megapixel and a 1.3 megapixel camera, rear and front respectively. Unfortunately, this cheap smartphone lacks the ability to constantly listen for the user’s voice and promptly reacting to its commands, which is one of the most interesting and useful features of Moto X, Moto G’s higher-priced sibling.

All in all, this device is a great purchase for those who cannot afford or don’t want to carry a luxurious smartphone.  The best part is that users won’t have to spend much money in order to have a device that is able to access Google’s Web services. Motorala has managed to offer a high quality mobile internet experience for a very reasonable price within the smartphone market.

Laura Gomez
« Seventh recall for Ford! What is happening to second-largest U.S. automaker?
Flying on the merged wings of American Airlines and US Airways »
Leave a Comment
Close