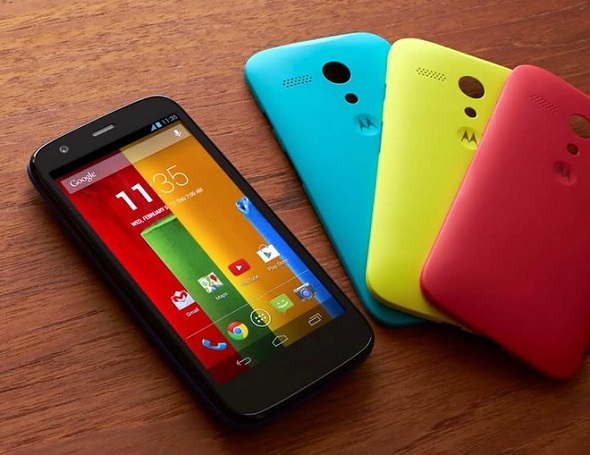 Moto G2 will feature a 720 x 1280 display with a 320ppi pixel density, which is slightly lower when compared to the G version.

According to a report, Motorola is all set to launch a successor to last year’s Moto G on September 10th. The sequel’s name has not been revealed yet, but it’s been given the G2 moniker to indicate an update to last year’s model.

Since the possible price of the Moto G2 is said to be around €250, the release date seems to apply only to Europe and possibly the UK. The information is said to have come straight from a Motorola representative, so they may have some merit.

According to the site, the Moto G2 will feature a 720 x 1280 display with a 320ppi pixel density, which is slightly lower when compared to the G version. This places the screen display size to 5 inches, compared to the Moto G’s 4.5 inches, though the resolution remains the same. Motorola has chosen to use the same quad core 1.2GHz Snapdragon 400 processor, an Adreno 305 GPU, a Cortex-A7 CPU, 1GB of RAM, and 8GB of internal storage (with possible microSD expansion), which is not much in comparison to the latest smartphone models, but for its cost factor, it should be good enough.

Motorola has upgraded the camera; the device now has 8 megapixel rear-facing camera, a 2-megapixel snapper on the front for video chats. However, there’s no information on the battery life yet, though a minimum 2070 mAh Li-Ion battery can be expected, which was also used on the Moto G. If it does pack the same battery capacity, users can expect more than a day’s worth of battery life. The Moto G2 will come with Android 4.4.4 Kitkat out of the box.

The Moto G2 has also been rumored to have a dual-SIM format. The OS has not been mentioned, as Motorola is now backed by Lenovo and not Google. But since it has been confirmed that Moto X and Moto G will upgrade to Android L operating systems, it is most likely that the G2 will also have the new Android edition. The fact that last year’s Moto G operated on stock Android was a key selling point for Motorola. Considering the stiff competition from smartphones such as the Xiaomi Mi3 and the Asus Zenfone 5, its price might make people wary about selecting this Lenovo-backed Moto G2.

Other than the Moto G2, Motorola also intends to launch the Moto X+1 flagship on September 25 through Verizon. Most probably both handsets could debut at the IFA 2014, since their release dates are so close by.

Neslon admitted that gasoline, travel, food courts, and business centers performed exceptionally well, adding to the overall profits. The retailer hit an all-time high when it came
43 mins ago

Musk has been critical of Twitter’s free speech policies as he believes the social media giant is “the de facto public town square.” When the Elon Musk Twitter deal was annou
44 mins ago