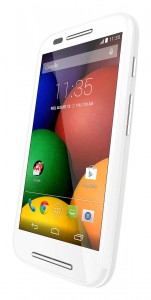 Earlier this year, Motorola came out with the second generation model of the Moto G and Moto X with few improvements and tasted more success with both. Looks like it’s time for the Moto E now.

Motorola’s Moto E proved to be an immensely successful smartphone in developing markets where it also went on to become a trend-setter due to its advanced hardware and software offerings that were offered at a low price.

Even thought the first model is only six months old, Motorola is already looking to update the Moto E with a new model. That’s according to Greek website Techmechanics, although the site did not elaborate on when exactly the second gen version will be launched.

When compared to both Moto X and Moto G, the Moto E tagged with a much lower price. The budget android smartphone which comes with decent features remained among one of the top budget smartphones of 2014.

It’s therefore no surprise that the US based smartphone manufacturer is almost ready to roll out the2nd generation version of it with a few hardware and software improvements. The specs of the said smartphone have been leaked already.

According to Techmaniacs, the second generation Moto E will boast a bigger 4.5-inch capacitive LCD touchscreen, although it will retain the same 540 x 960 pixels resolution with Corning Gorilla Glass 3 protection. The handset is expected to retain many of the same internals as the first model, with a Snapdragon 400 processor coupled with 1GB of RAM memory. It could be clocked in with a 1.19GHz quad-core processor. The device will have a 5MP rear snapper without LED Flash and also front facer this time. The device is said to be running on Android Lollipop 5.0 along with LTE connectivity.

Another report released last month by Gizmobic claimed to spot an unspecified device on the GeekBench testing benchmark site. It is said to have come across a device that was being tested, which was tagged as Motorola TBD (To Be Disclosed).

Though the release date is still a mystery, the new Motorola Moto E is expected to go official during the CES or MWC expos in 2015. Without revealing exact pricing, the report says the device will carry a very low price, like the original. However, the report didn’t post any images of the upcoming Motorola smartphone.

Anna Domanska
Anna Domanska is an Industry Leaders Magazine author possessing wide-range of knowledge for Business News. She is an avid reader and writer of Business and CEO Magazines and a rigorous follower of Business Leaders.
« Intel plans to invest US $1.6 billion to upgrade chip plant in China
Facebook Campus Welcomes Top Chinese Regulator to the U.S »
Leave a Comment
Close