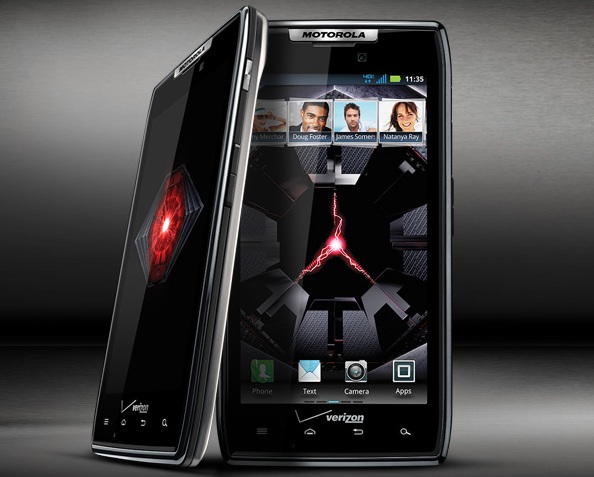 The announcement was made at a press conference held in New York on 18th October 2011. Designed to function on Verizon’s 4G LTE platform, the Droid Razr is the thinnest 4G phone to have been launched yet, keeping in tune with the “Razr thin” brand identity that Motorola made iconic all those years back.

The phone has been designed to a thickness of 7.1mm and weighs a mere 127 grams. The Droid Razr has been constructed out of Corning Gorilla Glass and Kevlar fiber- ensuring the ultimate in strength, sturdiness and hardiness. And while you’re probably not going to be dodging bullets with this sleek little gizmo, you’ll be glad to know that Motorola claims that this new baby is completely scratch-resistant. And if that’s not enough, a nano-coating of a water-repellant makes the phone even tougher!

Don’t let looks fool you: this tiny thing packs quite a punch with a dual core 1.2GHz processor. With 1GB of RAM, a front HD camera for video chat, an 8-megapixel back camera, a 4.3 inch Super AMOLED Advanced display screen and an Android 2.3.5 Gingerbread platform, the new Motorola Droid Razr sounds rather promising.

That’s not all though! The phone also comes with a pin lock, a remote wipe system, a platform for streaming Netflix content in High Definition, Motocast for downloading and playing content, Quickoffice document applications and more! The phone has a 32GB memory- divided between a 16GB portion built into the computer and 16GB portion that comes with the MicroSD card.

An exciting new feature of the Motorola Droid Razr is the Bluetooth 4.0 system. This advanced Bluetooth platform has only been released in one other phone till date, the recently launched iPhone 4S.

The estimated price of the Motorola Droid Razr is going to be $299.99. The phone is being made available with the mobile service Verizon Wireless. According to the latest technology news, the phone will be available in the markets from the first week of November. Those interested can pre-book the phone from the 27th of October 2011.

Changpeng Zhao, also known as CZ, is now the 11th richest person in the world with an estimated net worth of $96 billion.
24 hours ago