Most Expensive Engagement Rings EVER. Two souls, one heart and one filthy expensive engagement ring. 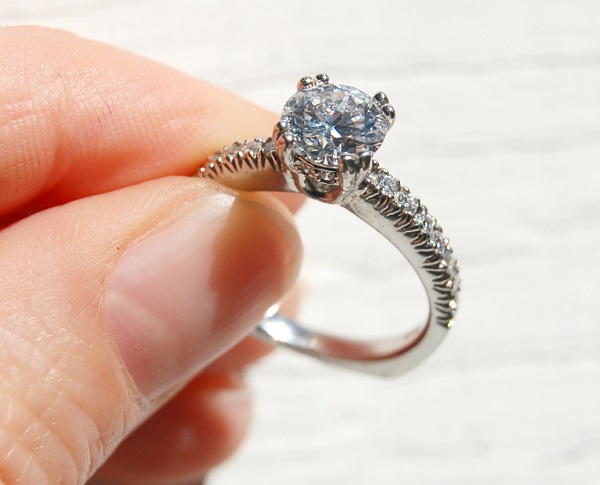 Most Expensive Engagement Rings in the World

“I have an engagement ring, which is my favorite accessory.”

When love is in the air, these individuals, who are crazily in love, decide to pop out the question: “Will you marry me?” And when it comes to an engagement ring, some will not be satisfied with an average one! They aim high as their love is heavenly.

Not surprisingly, engagement rings have been known not from yesterday, in fact they have been known for centuries and they have been used as a sign and symbol of either being engaged or betrothed as well. An engagement ring represents a man’s desire and commitment to a woman, not to mention love and loyalty. Some believe that an engagement ring should have a diamond as the stone is one of the hardest gems available and indicates the strength and durability of the affection. Yet, also other precious and semi-precious stones are also used in designs of engagement rings so your choice is not boringly limited only to diamonds – remember about it! If you are thinking about buying an engagement ring with another stone, it would be desirable to check the meaning that the gem can hold as each symbolizes arguably something different. And keep in mind that also engagement rings with other stones can also be exorbitantly expensive.

Someone once said: “Marriage requires a person to prepare 4 types of “Rings”: Engagement Ring, Wedding Ring, Suffering, Enduring.” The question remains whether you are ready to pop out the question with the ring that symbolizes a strong commitment to love and care for your beloved one.

Do you not care about money as the world’s richest and most famous do not? Are you looking for something overwhelmingly breathtaking and unique? If the answer is “yes” and if you are looking for an inspiration just look down where you can find engagements rings which are believed to be the most expensive ones in the world.

The orgulous owner of one of the most expensive engagement ring is Beyonce. But that is not surprising taking into consideration who gave it to her. Jay Z, who is famous for his ingenuity and extravagancy, proposed to his girlfriend with the outstanding 18-carat flawless diamond ring designed by Lorraine Schwartz. The ring is valued at substantial $5 million and is said to be one of the world’s most expensive engagement rings.

The ring was presented to the public in September 2008, a few months after the famous couple of world-known musicians got married. Certainly, the unique diamond makes it so expensive especially as it is set onto a exorbitantly costly platinum split shank! Jay Z decided even to make a $5,000 copy of the Beyonce’s engagement ring so it could be used by his spouse while performing on stage.

Even though Paris Hilton was the owner of the world’s second most expensive engagement ring at the time, her example shows that the ring might not always lead to the marriage. She was gifted the exceptional 24-carat Emerald cut diamond engagement ring by her then Greek soulmate Latsis. Without a doubt, Paris Hilton is either loved or hated, but she surely knows what she is worth. And it seems that so did Latsis at the time.

The engagement ring unfortunately did not lead to “happily ever after”, but at least after all it was auctioned off for charity, she used it for a good cause. Paris Hilton used to say that her hand hurt from wearing the impressively massive engagement ring. So you should consider whether the big diamond is something what your beloved one wants…

Beyond doubt, Donald Trump, world-known American business tycoon, should not feel cheap because of the vastly impressive 15-carat Emerald cut diamond engagement ring with which he proposed to his partner Melania Knauss. What is interesting is the fact that at the time of the proposal, the Melania Knauss’ ring was believed to be the world’s most expensive as it was valued at $2 million – $3 million until 2005, but then Paris Hilton’s one gained the title.

Jacqueline Kennedywas said to have been arguably an fashion and style icon. Even today she is much respected for her own individual style which was also appreciated by her partner, Greek shipping magnate Aristotle Onassis. As Onasis worshiped Jacqueline, he asked the question with the enormously huge 40.42-carat diamond Lesotho III ring which was designed by Harry Winston. Actually, the Jacqueline’s precious stone is one of only 18 diamonds cut from the almost mythical 601-carat rough Lesotho diamond discovered in Lesotho in South Africa back in 1967. Every romantic story has its end… After all, the piece of jewelry was auctioned off in New York for slightly over $2.6 million in 1996, exceeding experts’ estimates of $500,000 to $600,000. Jacqueline was said to have worn the ring only two times.

But it was not the only very much expensive engagement ring which she was given. Also her first husband, later the president of the United States, John F. Kennedy spent approximately $1,5 million on the ring for his Jacqueline.

Elizabeth Taylor‘s once divulged: “My mother says I didn’t open my eyes for eight days after I was born. But when I did, the first thing I saw was an engagement ring. I was hooked.” And something must have been in that statement as Elizabeth Taylor, the icon of the film, went down the aisle several times and had many engagement rings. But the most expensive one she got from Richard Burton who was the biggest love in her life and twice her husband. The 33.19-carat diamond ring was auctioned off in New York in December 2013 and bought by a private buyer from Asia for slightly more than $8,800,000.

Apart from loving engagement rings, she also loved jewelry. But the fact is that sometimes her taste was described as peculiar, eccentric and bizarre, yet as old Latin saying notes: “De gustibus non est disputandum” – “In matters of taste, there can be no disputes.”

The question – the ring

If you are not inspired by all above engagement rings of rich and beautiful, you might also check out rings that are owned by Jennifer Lo, Kim Kardashian, Catherine Zeta Jones, Mariah Carey, Camilla Parker-Bowles and others. If are still not moved and you haven’t found anything special at the jewelry, then you can think about designing an engagement ring for your beloved one as Brad Pitt did.

Remember that you do not have to stick only to white diamonds which are popular. You have a whole color palette. And what is more, blue and pink diamonds are the most expensive ones.  And certainly, the diamonds are the girl’s best friends but keep in mind that you do not have to hold on like grim death to diamonds as there are so many other gems. You can let yourself design or buy something more extravagant and you will not regret it. You may always look for an engagement ring at auctions as there are so many incredibly expensive daisies which once were owned and worn by the most influential people on Earth.

Remember one thing that women are said to love shining and expensive gemstones on their fingers, however every woman is different. While deciding what you want to buy, think about her and her taste and likings. Good luck!

Anna Domanska
Anna Domanska is an Industry Leaders Magazine author possessing wide-range of knowledge for Business News. She is an avid reader and writer of Business and CEO Magazines and a rigorous follower of Business Leaders.
« China to replace US as the World’s Biggest Economy in 2016
Ideas – cleaning up oil spills. Good planets are hard to find so just clean oil spills. »
Leave a Comment
Close