Modern architecture is untouched by culture. It is, in a certain sense. Where are those old granite buildings with an emerald moss and silver lichen growing on their shoreward walls? Inhale them and you can recall what? Anything but rotten, such as pure nature from partial immersion that mussels, fungi and moss. The fact is, is unexploited visually and commercially. It needs fresh air. Most architects think otherwise. Fungi, moss and lichen growing on the façade of a building is a sign of decay. You see, building materials are designed specifically to resist growth of microorganisms. So much effort is put into developing biocides to make sure the concrete and wood and bricks are never colonized by living things. Times are changing now, for plants and lichens on a concrete wall might turn out to be a sign of sophistication.

BiotA Lab at University College London’s Bartlett School of Architecture has developed an innovative wall-panel system capable of hosting microorganisms and nurturing bio-colonization directly from the pores on its surface, without the need for soil and associated irrigation systems. The novel design engineering method seeks to improve façade performance through implementation of a new type of biologically receptive concrete. The multilayered panel system intends to overcome many of the limitations of existing green walls, particularly the need for expensive maintenance.

The so-called biological concrete is designed to support the growth of mosses, fungi, and lichens.

Unlike green roofs and vertical gardens, the green walls are made out of a special type of cement: magnesium phosphate cement (MPC), which has slight acidity and supports biological growth.

The design team from Bartlett’s School recently exhibited their innovation as a part of the SuperMaterial exhibition at The Building Center in London. The exhibition aimed at showcasing how materials will transform our relationship to both natural and built environments, and bio-concrete fit right in.

The ultimate aim is to develop bio-concrete was to transcend existing limitations in creating a green wall. For instance, the mechanical irrigation systems and other expensive maintenance that are required to keep existing green walls functional, not to mention the high level of expensive associated with the initial implementation. Additionally, existing green wall systems demonstrate a low integration between structures and the living organisms that grow on them.

Bio-concrete is one way to respond to the urgency of improving the quality of air in our heavily polluted cities. Climate change, increasing levels of pollution and shifting biomes has resulted in an ongoing effort of making cities greener and more sustainable. In the past century, we’ve only focused on buildings green roofs and façades, as an opportunity for greening. The biggest drawback is that such ‘green walls’ have proven expensive to implement and manage. Even worse, it has failed to address the increasing loss of cryptogamic surfaces, which have passed unnoticed in our cities.

The magnesium phosphate cement developed at BiotA Lab will allow micro-organisms that have been overlooked in current green wall systems to flourish. For instance, bio-concrete will allow the growth of cryptogamic surfaces – plants that reproduce via spores as opposed to flowers or seeds, such as mosses, fungi and lichens.

Bioreceptive concrete has been chemically altered to be favorable for microorganisms to establish and flourish. By adopting receptive materials into building architecture we can foster green growth for the building’s façade itself to become the basis for the growth of a photosynthetic system. Ultimately, such materials will allow plant life to flourish on buildings in a way that is sustainable to the environment, without compromising the structural integrity of the built environment.

The concrete made by UPC also absorbs CO2 in the atmosphere and acts as an insulating material as well as a thermal regulator. The researchers at UPC are in the process of patenting the innovative material. The next step, is of course, to accelerate the process so architects around the world can use the material to create mossy buildings. 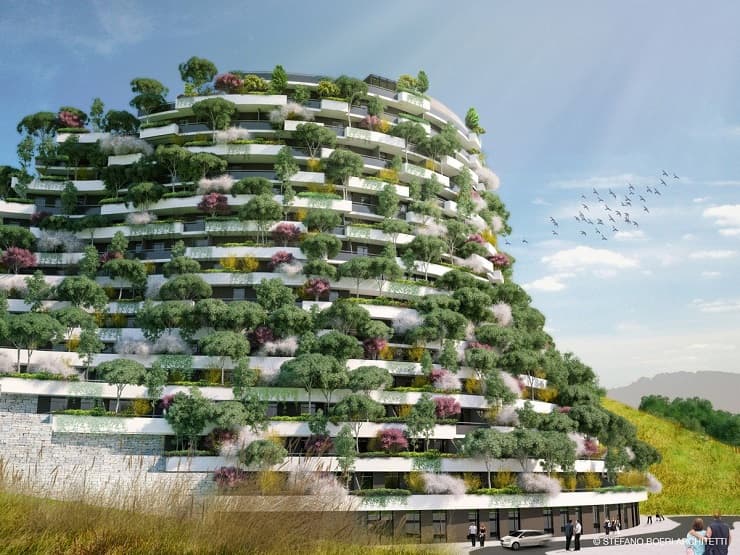 The Mountain Forest Hotel uses an innovative style of architecture.

The innovative material is not commercially available yet, but it promises innumerable benefits, including the reduction of greenhouse gases from the environment and more. The most compelling of all reasons to adopt the use of such materials is that it could exhibit an extraordinarily beautiful patina that transforms through all the four seasons of the year.

Architects talk about the skin of a building like it’s a living, breathing thing. It’s a metaphor used everyday in completely different ways. The design team at BiotA wants people to think of the exterior of a building as tree bark. It’s not just a protective layer – it’s a host. It allows living things to grow on it, and thrive as well. Barks are mediators between the internal conditions of a tree in which all kinds of species reside. Bioreceptive materials can allow microorganisms to grow on the façade and enrich the layer with a thriving ecology. Besides, there are no concerns such as living walls full of plants or green roofs needing maintenance. Unlike current systems such as ‘vertical gardens’, the bioreceptive concrete supports life on its own surface, meaning there is no need for complex support structures. That’s another way of saving plenty of money.

Let architecture speak of the times we are living in right now. Let the common man know what architecture is and how it helps human civilization. At the moment, our greatest need is to combat climate change and reduce global warming. This is the time when architecture must come and lay its services at the feet of the civilization.

Even today, the idea of including nature within a city is pretty much a foreign concept. It’s something that exists from the 18th century and way back, and yet we’re unable to put it to its full potential use to combat the biggest challenges of all. Why use nature as a decorative element, as a way to soften the look of a building, when we can use it to connect people with nature in the utmost profound way?

Anna Domanska
Anna Domanska is an Industry Leaders Magazine author possessing wide-range of knowledge for Business News. She is an avid reader and writer of Business and CEO Magazines and a rigorous follower of Business Leaders.
« The World’s Most Beautiful Car ‘Jaguar E-Type’ to Make a Comeback
2019 Ford Focus way ahead than its other generations »
Leave a Comment
Close