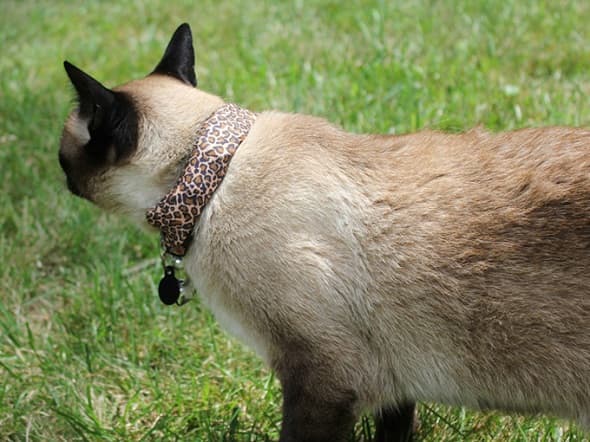 War Kitteh, is a new hi-tech cat collar designed to sniff out insecure Wi-Fi connections and showed the audience how they too, can turn their pet into a Wi-Fi hacker.

Security researcher Gene Bransfield demonstrated his War Kitteh, a new hi-tech cat collar designed to sniff out insecure Wi-Fi connections and showed the audience how they too, can turn their pet into a Wi-Fi hacker.

Bransfield who works at Tenacity Solutions, decided to run a tech experiment, using a Siamese cat as his trusty assistant. The device cost him about $100 to make and the unique collar was outfitted with custom-coded firmware, a Wi-Fi chip, a miniature GPS module, and a battery, everything a cat could need to sniff out the area’s most insecure Wi-Fi setups or using weak encryption algorithms like WEP.

The cat then went out wearing the device in the suburban Washington, D.C., neighbourhood to identify weak guarded Wi-Fi networks. Its location was tracked using GPS technology, with data stored on an SD memory card. Three hours later, the feline returned with data. Of the 23 Wi-Fi hotspots identified by the cat collar, more than a third remains exposed. The device identified four routers which were completely open with no password required to log on, and another four using an outdated encryption rather than the more-secure WPA-2 standard. Many, Bransfield said, were Verizon FiOS routers with unchanged default settings.

Bransfield told that the project was intended to bring about awareness as to why people should take more care protecting their Wi-Fi networks, in the hope that including cats in the debate will make less tech-savvy people pay more attention.

In the DefCon hacker conference that runs up until 10th August,  Bransfield plans to offer instructions for anyone to replicate his WarKitteh collar. He hopes that more people will start to take it seriously.

“It’s been a failure of the industry and of Def Con-like hackers to appropriately communicate this stuff to people,” he said. “We need to do a better job of communicating this stuff… You don’t want to scare the shit out of them. You want to effectively communicate to them what the issues are.”

Open WiFi networks or those with vulnerable form of encryption can give hackers access to the network to use for abominable means or to spy on those users and access their information which can be used to steal an identity. This should act as a wake-up call to all those users who have not yet considered an open WiFi network as a huge threat to their personal information.