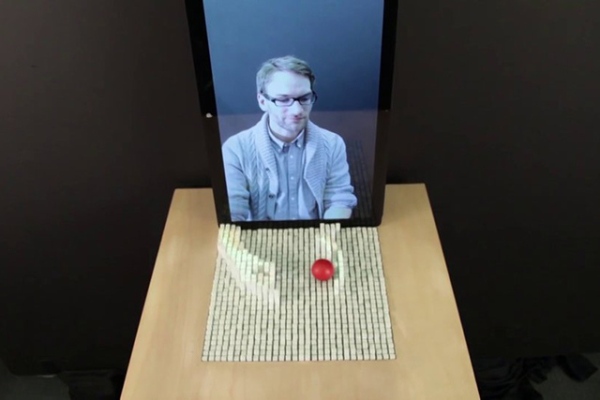 For those who would want to carry on long-distance meetings and product presentations in a more authentic and tangible way, Massachusetts Institute of Technology (MIT) has a special business treat: inFORM, its new tangible 3D modeling projector. Forget about holograms and get ready, because you will be able to really touch the objects!

Researchers from the MIT have come up with inFORM, a device that is able to render digital 3D content physically. The tangible 3D modeling projector was exposed last week on the MIT’s website by its inventors, PhD students Daniel Leithinger and Sean Follmer, in collaboration with Professor Hiroshi Ishii of MIT’s Tangible Media Group. In a video, the machine was used for 3D modeling, Math education, controlling media devices, and revising bar charts. Also known as dynamic shape display, this device lets people interact with digital information in a more concrete way, for it can render 3D data physically. Furthermore, in the context of a video conference, remote participants can be displayed physically as well, allowing for what the MIT scientists call “a strong sense of presence” plus the advantage of physical remote interaction.

The dynamic shape display functions by making use of a computer, a projector -which is an Xbox Kinect sensor-, 900 pins, linkages and actuators. Each pin is about 9.535 millimeters x 9.535 millimeters and is able to move up and down, acting as a real-life pixel. The pins are spaced 3.175 millimiters apart and are controlled by microcontrollers (which are small computers) that communicate to each other on a very efficient and fast network. Next, the projector is used to display colors on top of each pin. The Kinect is the last component of the MIT’s InFORM, and is used to produce mid-air gestures and to track touches and objects on the table.

Follmer explained that MIT’s Tangible Media Group has been working on new realistic ways to approach communication devices like smartphones and tablets, which recently have lost the tactile feeling. Their main goal is to upgrade the physical affordances which allow the digital interfaces to preserve tactile feedback and interaction, in order to make the experience more authentic.

Where is it useful?

MIT’s InFORM has different fields of action, however, its high cost –around 27,000 dollars invested only in the acquisition of the 900 actuators, which are the small motors controlling each pin– makes it not affordable for everyone. The dynamic shape display could be a good acquisition for those who need to show dummies or of product’s models at distance. Follmer’s team showed how inFORM displayed a 3D model of a car on its table and how a remote collaborator could touch physically the virtual model; meanwhile, the subject who was co-located with the inFORM system could touch and intectact with it directly as well.

This tangible 3D modeling projector can be a useful device for 3D modeling and computer-aid design as well. With its help, designers will be able to touch, see, and understand their digital designs instead of waiting for a 3D print which is likely to take quite a few hours. The device can also be used in the exploration of geospatial information such as urban planning data and maps. Having the physical display will help urban planners and architects to understand further models of sites and buildings in the physical world. 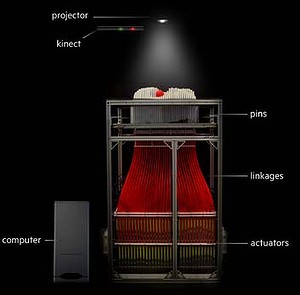 How the inFORM works

Laura Gomez
« Beware, for your email account is not safe yet!
Cinnamon time of the year »
Leave a Comment
Close