Did you know that 39 percent of all water drawn from US rivers, lakes and reservoirs is used to cool electric power plants? Much of that water ends up going out of those cooling towers in the form of vapor.

A group of researchers at MIT have developed a new system that recovers fresh water from cooling towers. The system draws similarities to the existing fog net technology, which involves using vertically-hanging fine mesh nets to collect water droplets from moist air passing through them. The collected water droplets trickle down the mesh, and are collected in a trough at the bottom.

The system that zaps clean water out of power plant steam is the basis for a startup company called Infinite Cooling that last month won MIT’s $100K Entrepreneurship Competition. Infinite Cooling’s founders Maher Damak and Kripa Varanasi raised around $2.5 million to scale up to commercial deployment of the unique water capture technology. 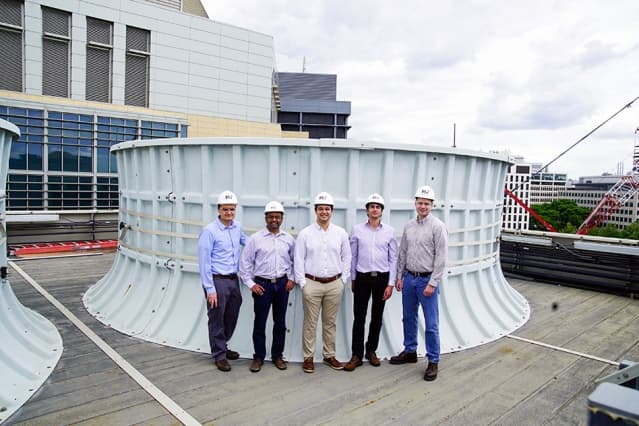 The idea of capturing water droplets from vapor plume is nothing new. Last year, Omar Yaghi, a chemist at the University of California, Berkeley, developed a water-harvesting device that excels at absorbing water, even under low-humidity conditions.

Infinite Cooling began as part of Damak’s doctoral thesis, which aimed to improve the efficiency of fog-harvesting systems that are used in water-scarce regions. It can recapture up to 80 percent of the water droplets from moist air that would normally escape from cooling towers of power plants. The water collected is then recycled back into the cooling system. Infinite Cooling’s water-harvesting technology could decrease power plant water consumption by 30 percent by recapturing water from moist air and turning cooling towers into a closed system. This could help save gallons of water each year.

The unique water-harvesting technology could have a significant environment and economic impact in water-stressed countries. It could also show great hope particularly in the U.S., which has more than 7,000 power plants across the country.

Anna Domanska
Anna Domanska is an Industry Leaders Magazine author possessing wide-range of knowledge for Business News. She is an avid reader and writer of Business and CEO Magazines and a rigorous follower of Business Leaders.
« Is Apple ready for a world beyond the iPhone?
The 2019 Mazda MX-5 Miata Specs and Pricing »
Leave a Comment
Close

Much like the flying car, the self-driving car has appeared frequently in sci-fi movies and TV shows. Who could forget Bruce Wayne’s favor...
5 hours ago

Europe’s data protection laws under the General Data Protection Regulation need to be revised to meet the post-pandemic world’s ...
9 hours ago