Autonomous driving, long a feature of sci-fi and tech flicks, has become a reality with scientists and researchers working hard to make it more intuitive and technically sound to take care of all aspects of driving.

Tesla’s Autopilot and super cruise features of some other self-driven vehicles carry the most advanced driving systems, but there are times when unforeseen circumstances like inclement weather stump the most technically sound systems.

Self-driving vehicles rely on cameras and light detection sensors (LIDAR) to navigate. But in bad weather conditions like fog, snow and heavy rains, visibility decrease and hinders the tech from working effectively. It is impossible to see road markings and find correct bearings of where one is.

MIT’s Computer Science and Artificial Intelligence Lab (CSAIL) is working on a solution to this problem by looking underground. They are using a technology called localizing ground-penetrating radar (LGPR), which utilizes electric pulses to find out the composition of soil below the road up to a depth of 10 feet. It can create a real-time map of the ground below the road’s surface. 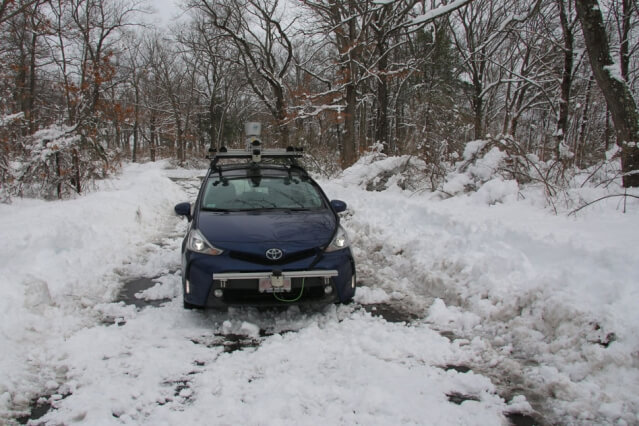 MIT’s new system allows a self-driving car to situate itself in snowy conditions.
Photo courtesy of the researchers.

“Our work demonstrates that this approach is actually a practical way to help self-driving cars navigate poor weather without actually having to be able to ‘see’ in the traditional sense using laser scanners or cameras,” MIT professor Daniela Rus, a senior author on the forthcoming paper set to be published later this month, said in an article on the CSAIL website.

The tech works in parking spaces as the concrete and steel used underground creates a unique imprint, which LGPR can detect.

“If you or I grabbed a shovel and dug it into the ground, all we’re going to see is a bunch of dirt,” said CSAIL Ph.D. student Teddy Ort to Endgadget. “But LGPR can quantify the specific elements there and compare that to the map it’s already created, so that it knows exactly where it is, without needing cameras or lasers.”

The margin of error of LGPR in snowy conditions was just of an inch compared to balmy weather. Rainy conditions made this error a little larger (5 inches) due to the water seeping down and expanding the soil.

In the six months of testing, there were no accidents faced by the system. The researchers are confident that it could be extended to high-speed roads and highways. Another advantage of LGPR is that underground mapping does not change much over time, unlike above surface ones where features tend to change much faster.

The system needs to be scaled down to fit into vehicles for commercial use. It is still far from being road-ready. The data needs to be more integrated to deal with multi lanes and intersections.

Also, it goes without saying that the LGPR will be used in collaboration with LIDAR and navigations maps to avoid pedestrians, bumps, lights, etc.

Ground-penetrating radars are not new and have been used by the construction industry and even by astronauts to find out the surface composition of the moon and Mars.

“Before releasing autonomous vehicles on public streets, localization and navigation have to be totally reliable at all times,” says Roland Siegwart, a professor of autonomous systems at ETH Zurich who was not involved in the project. “The CSAIL team’s innovative and novel concept has the potential to push autonomous vehicles much closer to real-world deployment.”

Mercedes-Benz has unveiled a battery-powered luxury car as part of the brand’s flagship S-Class saloon, designed to compete with Tesla. The 2022 Mercedes-Benz EQS is set to relea
19 hours ago

Bitcoin price has once again soared over $63,000 USD as the cryptocurrency market braces for the upcoming Coinbase IPO. The San Francisco-based cryptocurrency exchange platform, wh
21 hours ago