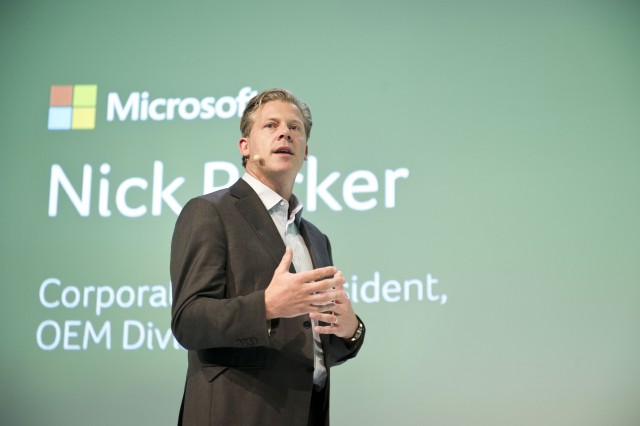 On September 4, 2015, Nick Parker, Vice President of the OEM Division, Microsoft Corporation, will take the centre stage at the IFA 2015 Berlin, to showcase a myriad of new gadgets, from brand new Surface Pro, to Keynote, to Lumia handsets, to an updated and refurbished Microsoft Band, and enhanced details over HoloLens.

Till now, the company has been fixating for a Windows 10 successful launch, and seems it has worked, with more than 75 million users in less than a month. Now the main focus is shifting to the devices that run on the new OS.

All devices will operate on a version of Windows 10, from the HoloLens, to the Surface series, to the Microsoft Band, and the new Lumia, as per the new strategy under Satya Nadella. The implementations of these gadgets are very important because without them Windows 10 cannot shine.

The new Lumia devices, which the tech giant has been working on since quite a time now, is going to be the show stopper of the press event at the IFA Berlin, 2015. It won’t be wrong if we say that the new OS is badly missing a flagship lineup device to show case how great exactly can the new operating system be. Ever since the last high- end Lumia 930 released by the company in July 2014, there has not been any fresh reveal yet.

The new Smartphones those are likely to be unveiled at the press event in Berlin, have been named as Lumia 950 and Lumia 950XL. These two devices have been a subject to multiple speculations over past few month since the rumor started doing rounds and leaks started featuring over various social media platforms through multiple insider sources.

As the name suggests, the Lumia 950XL will be the larger one from this duo launch, with a display of 5.7- inch that places it a bit beyond the iPhone 6 plus while less than many high-end Smartphones by Android.

This obviously doesn’t mean Lumia 950 is a miniature one, with a display size of 5.2 inches it is bigger than an iPhone 6 by half-an-inch.

Keeping up with the Lumia legacy, the duo will feature huge cameras- very huge; in fact, they might acquire a slight bulge on the backside in order to accommodate themselves within the device. While there are no test shots demonstrated yet, it will be on a safer side to assume that the company has spent quite a great amount of time to make the best and the most premium camera available in the market. This can be a major trading and buzz worthy point for the brand new series.

If the speculations are true, both the high-end devices may also carry a new technology known as a Quick Charge feature and USB Type-C, which might recharge the battery from very low to as high as 95% in less than 25 minutes.

Now let’s just wait and watch until Microsoft finally unveils its most anticipated version of Smartphones along with the other above mentioned devices at the IFA 2015 Berlin.

Christy Gren
Christy Gren is an Industry Specialist Reporter at Industry Leaders Magazine she enjoys writing about Unicorns, Silicon Valley, Startups, Business Leaders and Innovators. Her articles provide an insight about the Power Players in the field of Technology, Auto, Manufacturing, and F&B.
« Samsung Launches SLEEPsense, a Device to Improve Sleep and Control Home Appliances
Uber adds another $1.2B to its War Chest in Ongoing Fundraising Round »
Leave a Comment
Close