Microsoft set to release a Universal Keyboard that works on Android, iOS and Windows devices 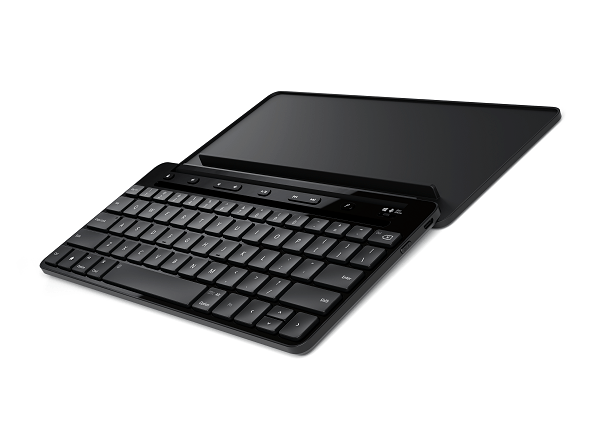 The Universal Mobile Keyboard will be available in October for $79.95 at the Microsoft Store, along with several other retailers.

“People frequently find they have a mixture of operating system platforms, resulting in them having to carry different accessories for each device,” explained Microsoft spokesperson Suzanne Choney. “Microsoft’s new Universal Mobile Keyboard helps address that.”

There’s an OS switch on the keyboard that allows users change from one operating system to another while maintaining full functionality. Closing the cover will turn the keyboard off. The cover makes use of a magnetic assembly for easy attachment and removal. It also comes with an integrated stand that can be easily detached which allows users to position their tablet or smartphone as they see fit. It supports devices that are 10mm or thinner. The keyboard also supports each platform’s unique special key, including the Apple Command key and Windows Control key.

The Universal Mobile Keyboard works with Windows 8 or higher; Windows RT; Apple iOS 6 or higher; or Android 4 or higher. Notably, there is no dedicated Windows key, since Windows Phone itself does not support Bluetooth HID.

The keyboard’s rechargeable battery, which Microsoft says can provide 6 months of usage a single overnight charge. Charging the device for only ten minutes provides an entire day’s usage, it claims. It also sports a Home key, which is designed to work with the home screens of most mobile devices, and provides media playback controls.

The Universal Mobile Keyboard will be available in October for $79.95 at the Microsoft Store, along with several other retailers.

The arrival of the Universal Mobile Keyboard is another in a recent series of moves by Microsoft. The company said that the keyboard has been purely designed by keeping the consumers in mind. The addition of Android and iOS features will certainly help Microsoft reach out to users of platforms other than its own Windows and Windows Phone.

“Getting stuff done while you’re on the go has never been easier,” Microsoft wrote on its site. “The Universal Mobile Keyboard lets you get real work done with just your tablet or smartphone.”