Microsoft is announcing its plan to buy LinkedIn for $26.2 billion in cash. The offer of $196 per share represents a 50 per cent premium to LinkedIn’s closing price on Friday and is inclusive of the professional networking site’s net cash. In an email to staff, Satya Nadella, Microsoft’s CEO, said: “The Microsoft LinkedIn deal brings together the world’s leading professional cloud with the world’s leading professional network… LinkedIn will retain its distinct brand and independence, as well as their culture which is very much aligned with ours.”

Nadella further added that any staff not using the network should join and start using and learning more. LinkedIn’s share price skyrocketed, while Microsoft, which is planning to finance the takeover through debt issuance, saw a drop by 4 per cent.

In a statement, the Seattle-based tech conglomerate said LinkedIn will retain its brand, culture, and independence. Jeff Weiner will also stay on as CEO of the network. 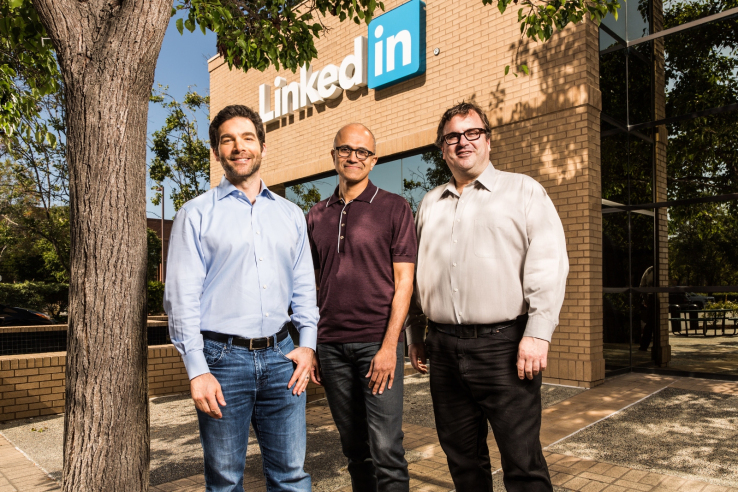 Today is a re-founding moment for LinkedIn. I see incredible opportunity for our members and customers and look forward to supporting this new and combined business.

The acquisition could be used as a key to boosting the company’s social networking presence. Four years ago, Microsoft spent $1.2 billion on Yammerback, however, things didn’t turn out as the software giant had hoped. The Microsoft LinkedIn deal will help the software giant control the best-known network where companies and potential employees interact. By turning LinkedIn into a smooth operation with a suite of tools like Skype, Office, and services run on Microsoft’s Azure platform.

LinkedIn, however, has certain overarching problems. In February, the stock suffered a 43 per cent drop – the biggest on the record – after the company warned about slowing growth at ‘talent solutions business.’ A slow growth along with reputation damage due to the massive data breach and the slew of new features injected to support additional revenue which has annoyed users have hurt the company. The decision to sell the company suggests the running the company as a stand-alone entity was not especially alluring.

Meanwhile, Microsoft’s history of Mergers & Acquisitions raises a lot of questions. Especially the $9.5 billion Nokia acquisition. In 2012, it spent $6.3 billion for digital-advertising agency qQuantive. These deals were sealed by Steve Ballmer, Nadella’s predecessor.

The Microsoft LinkedIn deal is the biggest ever the software giant has attempted. Pay off of transactions of such nature is often difficult, especially when the seller’s advisor is someone like Frank Quattrone’s Qatalyst Partners, a firm known for scoring high prices.

The deal could boost Microsoft’s growth as Nadella says, “we seek to empower every person and organization on the planet.”

Microsoft Vs. Apple: Which is more profitable?

Anna Domanska
Anna Domanska is an Industry Leaders Magazine author possessing wide-range of knowledge for Business News. She is an avid reader and writer of Business and CEO Magazines and a rigorous follower of Business Leaders.
« Samsung Galaxy Note 7 Official Teaser Leaks
Airbnb Revenue Soars Ahead of The Rio Olympics »
Leave a Comment
Close

Inflation is chasing the investors and policy makers at a speedy rate. CPI increased by 7% in December, 2021, the highest since June, 1982.
11 hours ago

Enriching consumer experience in LA, Amazon’s Style store is transforming the ways of buying outfits through suggested algorithms.
15 hours ago