Microsoft Demos Real-Time Skype Translator that works on the Fly

To some at the Code Conference, it may feel that they woke up in the future – first Google’s self-driving cars and now Skype auto-translate. At the Code Conference on Tuesday, Microsoft CEO Satya Nadella showed off Skype Translator, an upcoming real-time translation functionality developed by the company’s Skype and Translator teams. Using the Skype translation functionality, users can now talk in their native language, with someone who is completely alien to the language without having to worry about language barriers.  In a follow-up blog posted by Gurdeep Pall, Corporate Vice President of Skype and Lync at Microsoft, it was mentioned that the translator supports over 40 different languages and that Microsoft plans to bring the new feature to a windows 8 beta later this year. The company’s ultimate goal is to get this functionality on all devices, making it a universal language translator. “Ever since we started to speak, we wanted to cross the language boundary,” said CEO Nadella Nadella, before hinting towards a possibility of turning it into a commercial product over the next couple of years. While the Translation function is positively effective between English to German translation, the company plans to make it work with a number of other languages as well. 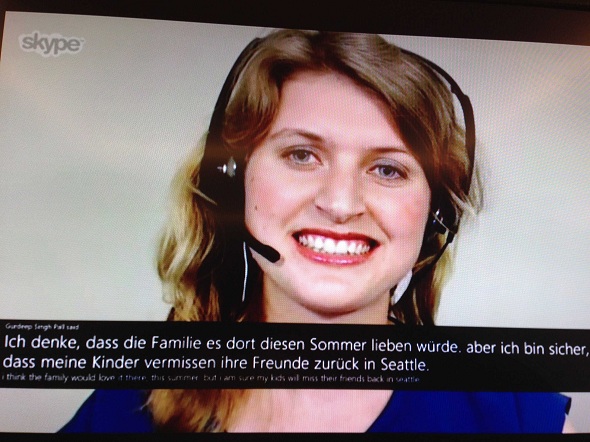 On the Microsoft Research Site, the company revealed that translating voice over Skype seemed like a ‘nearly impossible task’ and that it has been working on machine translation since more than a decade. However, for the last four years, the program received a jumpstart due to a project and was able to translate phone calls in real-time. While another project, helped them improve over speech recognition accuracy. “It is early days for this technology, but the Star Trek vision for a Universal Translator isn’t a galaxy away, and its potential is every bit as exciting as those Star Trek examples” said Pall at the Conference, “Skype Translator opens up so many possibilities to make meaningful connections in ways you never could before in education, diplomacy, multilingual families and in business”.

6/7 More Human. Technology is at a point where it starts to understand us, becomes more personal – see Skype Translator — Satya Nadella (@satyanadella) May 28, 2014

Skype has over 300 million users, with over 2bn minutes of conversations that take place over the tool every day. The service will prove to be quite useful for businesses that international office locations or tie-ups, erasing off the awkward language barriers. It is not yet revealed if the translation service will be free or not.

Anna Domanska
Anna Domanska is an Industry Leaders Magazine author possessing wide-range of knowledge for Business News. She is an avid reader and writer of Business and CEO Magazines and a rigorous follower of Business Leaders.
« Solar-Powered Roadways might just become The Roads of Our Future.
Un Capo d’opera! Palazzo Italia to get a smog-purifying façade for Milan Expo 2015 »
Leave a Comment
Close