“We are excited to have Versace as part of our family of luxury brands, and we are committed to investing in its growth,” John D. Idol, Chairman and Chief Executive Officer of Kors said. “With the full resources of our group, we believe that Versace will grow to over US$2.0 billion in revenues.”

Dubbing Versace as a milestone acquisition, Kors is endeavored to challenge the global luxury fashion market.

The American accessories label is positioned in the “middle market” of the luxury section, prominently available in department stores and other outlets with deep discounts.

Kors simultaneously witnessed a reduction in the mall traffic in America, which is its biggest selling point, reported the New York Times.

On the other hand, Versace has a strong customer base of big spenders and young admirers along with global popularity, especially in Europe and Asia. 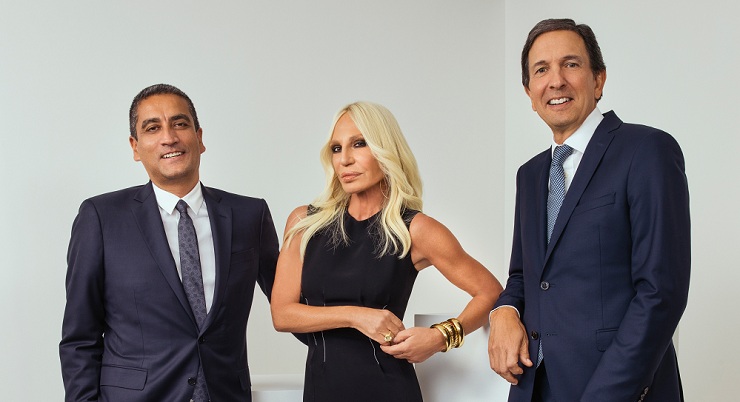 With Versace and Jimmy Choo in its portfolio, Michael Kors also announced changing its company name to Capri Holdings Limited (NYSE: CPRI). The name will be changed after completing the acquisition of Versace by the end of this year. It will retain the Michael Kors brand name.

The name, Capri, is inspired by “iconic, glamorous and luxury” island. The ‘three rock formation’ located on the site symbolizes the “timeless heritage and strong foundation” which, in turn, are also the core philosophies of all the three nesting brands, as described in a statement.

Donatella, Santo (brother) and Allegra (daughter) will also stay as shareholders of Versace.

“Donatella’s unmatched vision has led to the continued and growing success of our brand. I am thrilled to be joining Capri Holdings Limited, which will be instrumental in accelerating our growth globally.” Akeroyd said.

With the acquisition announcement, Kors also laid down the extensive investment plan for growing Versace.

It aims to increase the retail presence of the luxury fashion label from 200 stores now to 300 stores along with accelerating its e-commerce sales revenue.

Kors, moreover, wants to modify the portfolio to increase the revenue contribution of accessories and footwear from 35 percent to 60 percent. It also plans to leverage on Versace’s iconic marketing tactics.

The American fashion luxury group also intended to diversify geographical division of Versace in the following ways – America: from 66 percent to 57 percent, Europe: from 23 percent to 24 percent Europe, and Asia: from 11 percent to 19 percent.

Eventually, Kors visualizes this opportunity to grow the group’s earnings to $8 billion in the long term.

The total amount of cash to be received as part of MUFG Union Bank’s sale to Bancorp is $7.3 billion (800 billion yen).
11 mins ago