SUMMARY: Augmented reality company Metaio has come up with a system that allows people to turn any surface into a usable interface through a combination of augmented reality techniques and thermal imaging.

A major UI setback that software and hardware makers are familiar with is: What is the best possible way to interact with HUD (heads up display) and control it, for example, you wanted to view bits of news from your favorite newspaper on the breakfast table surface instead of your smartphone?

Metaio engineers have come up with a novel concept to solve this problem –make UI on any surface combining camera-driven augmented reality with thermal imaging!

The Munich, Germany-based AR software and solutions Company released a video (below) demonstrating the potential applications of ‘Thermal Touch’ interface.

“Everyone is talking about wearable computing eyewear like Google Glass,” said Metaio CTO Peter Meier, “but no one is talking about the best way to actually use those devices. We need natural, convenient interface to navigate the technology of tomorrow, and that’s why we developed ‘Thermal Touch’.”

Metaio R&D department had a few thermal cameras that they had just received. One researcher while playing around with them noticed that every time he touched something, it left a very visible heat signature imprint.

How Does Thermal Touch Work?

Hook up a thermal camera to the device you are wearing and track the heat signature that your finger trace leaves behind on the objects you touch. The lingering heat signature can be used to trigger actions similar to a mouse click.

As Metaio Marketing Director Trak Lord put it, “the thermal camera adds another dimension of understanding. If you have a [normal] camera it’s not as precise. The thermal imaging camera can very clearly see where exactly you’re touching.” 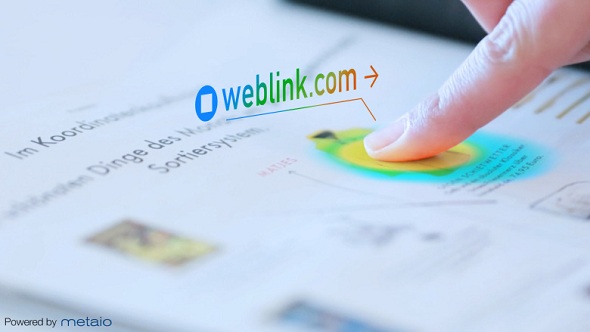 The demo video by Metaio shows enormous potential applications of the tech:

With “Thermal Touch”, a wearable headset user could turn any surface into a touch-screen: Imagine pushing directions to your device simply by touching a static map in a shopping mall, building complex or airport; children could bring play to new levels and launch digital content directly from their toys; design professionals could visualize their digital and 3-D creations on their real world counterparts; and service technicians could pull up information just by touching an object in real life.

“We can now essentially turn every surface into a touchscreen,” said Metaio marketing director Trak Lord, “someone’s got to do it, otherwise we’re going to be stuck with shiny rectangles for the next decade.”

Metaio Chief Executive Thomas Alt said Metaio has been working on Thermal Touch for about a year now. The technology is still around five years away from being market-ready.

For now, they’ve built a prototype which is built into a tablet demonstrating their concept to its device-making partners who wish to incorporate thermal sensing into devices whether they’re phones, tablets, or wearables.

Intel is one of Metaio partners, that is integrating Metaio’s augmented reality software into their software development kit built for ‘RealSense’ 3-D camera. “In the not too distant future, I foresee that consumer devices will have these sensors embedded into them,” said Alt.

Christy Gren
Christy Gren is an Industry Specialist Reporter at Industry Leaders Magazine she enjoys writing about Unicorns, Silicon Valley, Startups, Business Leaders and Innovators. Her articles provide an insight about the Power Players in the field of Technology, Auto, Manufacturing, and F&B.
« DOT Proposes Airlines Be More Transparent About Fees and Other Costs
Facebook tweaks privacy policies for new users to make posts less public »
Leave a Comment
Close