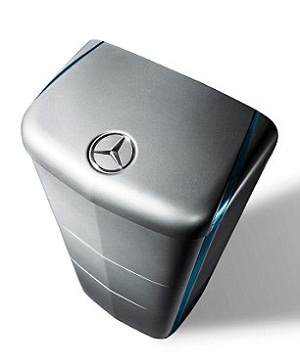 After Tesla Motors, and Ford, now it’s the German Automobile manufacturer – Mercedes-Benz, which introduced its sleek and portable home power storage unit, on Tuesday. The well-established auto manufacturer company took its time to work out with the plan, just similar as to Tesla’s approach to electric cars. But, one of the auto producer company’s new innovations – personal power supplies – now, has a fast follower – Mercedes-Benz.

The power storage unit is made with same kind of luxury design that the auto producer applies to its car units, the power storage units have an energy content of 2.5 kWh each, and you can link up to seven more for a total of 20kWh, as well as are additionally equipped to buffer the energy supply storage of households that are already using solar energy.

The idea is basically the same as of Tesla Motors – the power batteries will charge up during off-peak hours and then make use of that energy to supply power in your home. The units are also capable of storing surplus charge from solar panels.

At present, Tesla offers two configurations for the home battery storage units: 7kWh at $3000, and 10kWh at $3500. There is also another option of 100 kWh for businesses, but that won’t be available before 2016.

Although, there’s no word on pricing for the Mercedes-Benz model yet, but preorders are already available on the company’s website, and units are expected to start shipping in September.

The company is not revealing much information about its plans, but notes users can combine eight of the power supply storage units to generate more robust personal power plant for businesses or homes by deploying over all energy capacity of 20 kWh.

Later this week, Mercedes-Benz will debut the devices off at the upcoming Intersolar Expo in Munich – Germany.