Mercedes pays tribute to man and machine for dominating their chosen fields.

Mercedes-Benz is set to pay tribute to legendary player Bernhard Langer with a special Mercedes-Benz G-Class.

The company aims to highlight both the German golfer and the G-class with this move, as they have remained at the top of their field for decades.

In 2001, he was elected into the Golf Hall of Fame, but deferred his induction until the next year. Furthermore, he is one of the only five players to have won official tournaments on all the six continents where golf is played.

He has continued to play golf, even after turning 50, and has bagged a record 11 senior major championships. He is one of the most accomplished players of the PGA Tour Champions and was inducted into Germany’s Sports Hall of Fame in 2016. 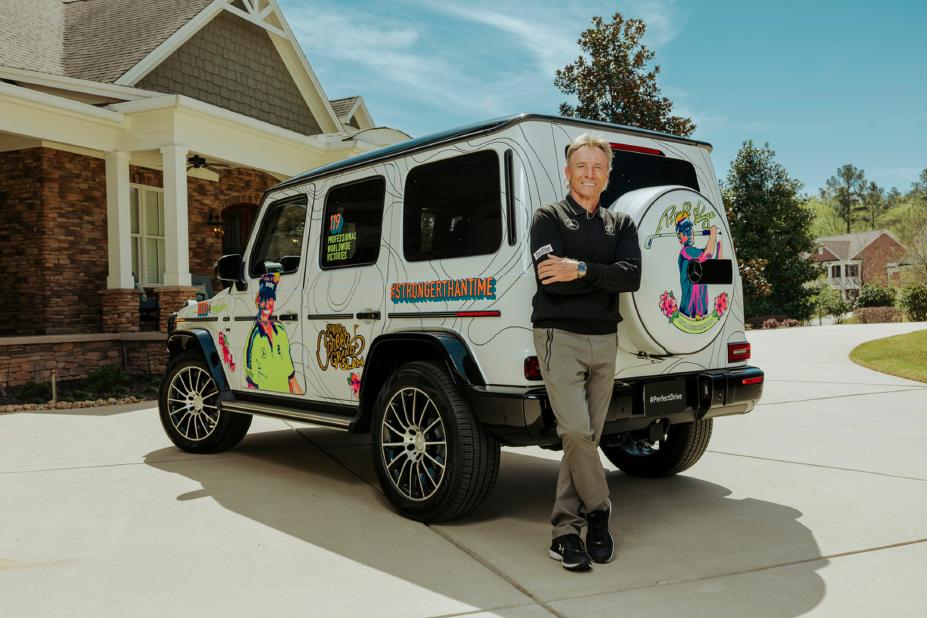 As both the car and the man command respect for their 40-year-legacy, it is only right that Langer arrives in the new 2022 Mercedes-Benz G550.

The carmaker has commissioned custom livery for the luxury 4×4 in collaboration with tape art artist Leah Abucayan. The car showcases a vibrant new design and features Bernhard Langer’s journey.

Bernard Langer expressed his joy at being felicitated by the carmaker saying, “I am delighted to receive this honor and am impressed by what has been created here. I have a lot in common with the G-Class. It already existed when I first competed here in 1982. Since then, we’ve both stayed true to ourselves, while at the same time always moving with the times and constantly evolving.”

He told People magazine that he has never seen anything like the car, “I mean, there’s many other good cars, but they consistently make a fantastic product. And coming from Germany, I grew up about an hour and a half from where Mercedes-Benz headquarters are. And they created an amazing brand and a wonderful car. And I feel myself very fortunate to be one of their ambassadors.” He also addressed the rush one feels at winning, admitting that once you taste it, you want it again and again.

One of the oldest players, he believes that it is important to maintain one’s energy. He admits that he slows down a bit but ensures he is having fun. Mental and physical fitness is of utmost importance for the game.

It will be a treat to see Bernhard Langer’s custom Mercedes-Benz G550, as well as the AMG SL and EQS at Augusta National Golf Course during the 2022 Masters. Spaniard Jon Rahm will also be present at the 2022 tournament as a Mercedes-Benz brand ambassador. Currently ranked number two in the world, Rahm has consistently maintained his position in the top ten. He will also wear a star on his sleeve for the first time during the 2022 Master’s Tournament.

One of the main sponsors of the 2022 Master’s Tournament is the iconic automaker Mercedes-Benz. The automaker has supported golf in various capacities for over 30 years. Apart from having accomplished golfers as their brand ambassadors, over 60,000 players participate in the MercedesTrophy.